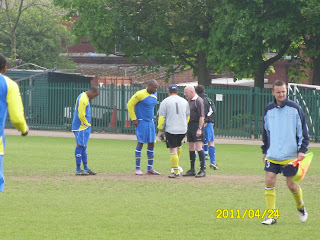 This was the last game for basement team Rolls Leisure Athletic, who will now cease to exist. Clumber needed a win to stay top, and keep the pressure on rivals Trentside.
Jaylee Hodgson came to have a chat before kick off – he was a little dubious about playing due to a slight groin twinge – he also has an injured arm that he hoped to protect – sill managed one flying overhead kick though! 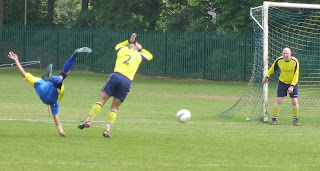 Congratulations are in order for the striker – he has just been selected for the Montserrat Nation squad….well done Jaylee.
Anyway, Brian Dennett turned up as the game kicked off, and spent few minutes identifying the players on duty for Clumber. Well known locally : Cashell Walters, Theo Smith, Jarrod Westcarr – these along with Zeke Jenkins and Jaylee make Clumber a very strong, skillful outfit. Add Deon Meikle and Wes Burke and it’s easy to see why they are league leaders, Sunday Cup winners and Notts F.A. Sunday Senior Cup finalists. 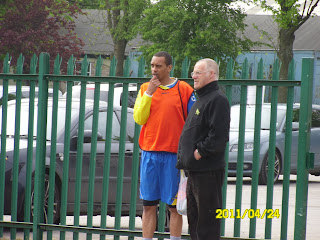 Not too many notes, but the visitors opened the scoring on 7, Walters crossing in from the left giving JASON BARRETT a simple close range tap in. 10 minutes later, Westcarr played a superb pass into the path of ASWAAN ALLEN and the no. 9 hammered the ball past the Rolls keeper with aplomb.
Rolls reduced their arrears after 28 minutes, when no.10 “Rico” bundled home from a couple of yards after a ball into the box had rebounded off the post. H-T 1-2 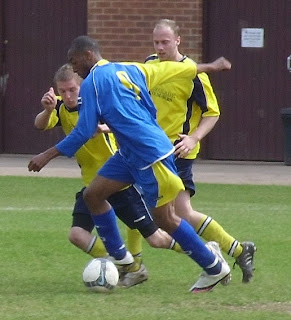 A peach of a goal from ASWAAN ALLEN restored the two goal cushion for Clumber – the no.9 curling a beauty from 25 yards that the keeper could only watch and admire!
On 80, Hodgson played a neat ball “round the corner” straight into the path of ZEKE JENKINS, and the full back chipped the keeper to make the points safe.
There was still time for JAYLEE HODGSON to notch up his 70th goal of the season, a fabulous far post header from Allen’s corner on 87. F-T 1-5

Nice and sunny, without being too hot….but the sunshine football from Clumber would have lit up a dull day anyway!
Can’t wait for the next Clumber game – the Senior Cup final at Carlton Town on Wednesday….

No admission
Attendance 10
Posted by Malc at 13:57