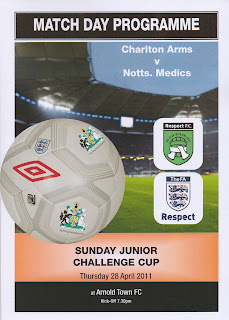 Didn't know too much known about these clubs – except that Charlton Arms play in Long Eaton Sunday League Division 1, while opponents Notts Medics are in the EMPAL Division 2.
Had a chat with Mr. Notts F.A. Mick Kilbee before the game started, then stood with Referees Rob Townsend and Declan Bourne for the first half, before spending the second half as a real “Billy No-mates” – I reckon I’ll have to change my deodorant !! 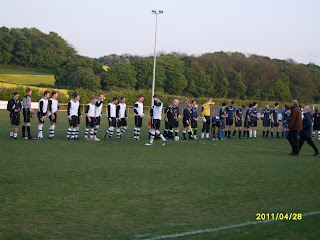 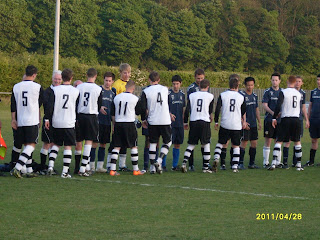 The game kicked off 10 minutes behind schedule as some of the Medics were held up in traffic, but they were quickly out of the traps and the game was only 3 minutes old when they took the lead. No real build up to the goal, the ball just seemed to land at the feet of OLIVER LACEY on the edge of the box, and he smashed it past Tom Geary in the Arms’ goal.
Arms had a great chance to level after 23 minutes, but Danny Prance was foiled by Medics keeper Ben Tschobotko, who blocked well. The keeper was at fault on 38 though, failing to get to a Danny Webster ball into the box, and although the angle was tight, DANNY PRANCE slotted the ball into the open goal. A great finish from the former Eastwood Town Academy player. H-T 1-1
Everyone piled into the clubhouse at the break – it was so cold no-one was interested in a cuppa or chips, they just needed to be indoors…..blimey it was cold!!!!
With 20 minutes or so gone in the second half, Webster had three half decent chances to put Charlton in front, but Tschobotko was able to block and maintain parity.
On 73, Medics went back in front after a superb ball into the box by James Franklin was controlled well by KYLE McBEATH, and the striker made no mistake firing past Geary. Charlton tried their hardest to break down a stubborn Medics defence, but it was the Medics who rounded off the scoring in the 2nd minute of added time, McBEATH again on the spot – going one-on-one with Geary and slotting home to secure the trophy. F-T 1-3
Very good game – two good footballing sides who played the game in the right spirit giving Referee Pat O’Dowd a relatively trouble and incident free game. Well done all!
Admission £2 inc programme
H/C 80
Posted by Malc at 23:16