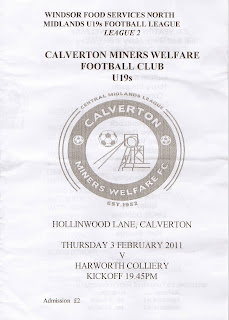 Batman was accompanied to this match by the Joker -- Robin is a bit under the weather at the moment so decided to stay behind in the bat-cave.....


Spent the whole game in the company of the creator of the Batman/Robin/Joker nicknames, fellow blogger, Rob Waite. Also spent the game with another blogger of note, Adam Barlow, author of the excellent "Mind Of An Imp" and Mick Cook, a seasoned Mansfield Town fan. All three made contributions to the APTCOO charity - taking the "other" donations total to £376.80 !!!


No match report as such, but Harworth didn't deserve to be on the wrong end of a 4-1 scoreline - they played well enough, but Calverton took full advantage of a couple of naive defensive errors in the first half, and although Harworth pulled one back, slack marking lead to the third for Calvo, and the fourth was a great header from a right-side corner.


The home no 9 netted the first on 20, racing through one-on-one with Harworth keeper Zack Lever and slotting home well. The same player added the seond after 35, again beating Levers after running in one-on-one. James Middlebrook netted for Harworth on 39, tapping home at the far post. H-T 2-1


The next goal came after 73 minutes of play - the Calvo no. 10 was left unmarked in front of goal and had the simple task of volleying home from close range. A corner on 89 from the right was headed home by the home no.5 - a great leap from the centre-half giving Levers no chance. F-T 4-1
Great company again - Brian did his usual "corporate hospitality" grab at half-time, and then spent most of the second half chatting up a young lady CML assistant referee.....must have thought it was his birthday or something!!!

Thanks again to Rob, Andy and Mick for their donations - and thanks for the smashing company.
Admission £2
Programme £1
H/C 40
Posted by Malc at 22:09