Tuesday 19th April 2011 -- NCEL Premier Division
What a cracking game this was, and we almost didn't go! I was thinking of the U19 final at Long Eaton, but when asked, Mrs. Kev said we ought to go to Arnold..... good call, Sue!!
This visit to Eagle Valley gave us a chance to catch up with our friend Rudy Funk. Scarborough are his third club this season, having been at Rainworth and Shirebrook earlier in the season.  We have now seen him in action for all three!
Arnold are struggling at the wrong end of the table, but a win at home against Hallam next Tuesday should see them survive the drop.  Boro are in transition - new Manager, the Chairman has just resigned -  but the fans are really optomistic about the future. They are treating this period of the season as a sort of pre-season, and according to "Seadogfan" Neil,  Rudy has been an instant hit with them.  Nice to have met Neil and put a face to a name - Neil's a fellow Kempster poster. 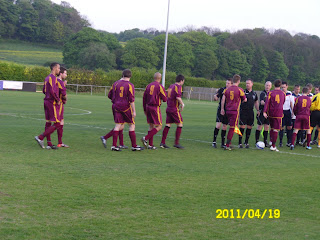 Arnold more than matched Boro early doors, but on 16, RYAN BLOTT headed past Lance Walker after the Arnold keeper had blocked his initial effort.  Lewis Kearney thought he had levelled soon after, but his effort was ruled out for offside.
Kearney slots home, but is offside
The Eagles were level on 38 though when Luke Smithson was played in on goal. As Boro keeper Tom Woodhead came out to challenge the midfielder, Smithson calmly played the ball across the goal to where MARK SMITH was waiting to prod home. H-T 1-1
Scarborough went back in front 10 minutes into the second half - and it was a strange goal by RYAN BLOTT.  Walker punched away a corner, but only found Blott on the left. His cross went straight into the goal, although Gary Hepples might try to claim it! Kev caught this on video.....
Ryan Blott cross/shot goes into the net with Walker beaten
After 67 minutes had been played, Boro were on the mark again - this time Walker failed to hold on to a drive from outside the box, and JAMES WEBB raced in to slam home the loose ball. Walker was having, by his own admission, a real "mare".
Arnold were back in it 3 minutes later when sub CARL SPENCER latched onto a ball played into the Boro area, and delicately chipped Woodhead.  The home team were level on 73,  LUKE SMITHSON rounding Woodhead to fire home after Walkers long kick had been flicked into the area by Martin Carruthers.
The Eagles' celebrations were short-lived, because after just two minutes of parity, RYAN BLOTT was on hand again as a long ball found him with a clear path to goal. Walker rushed out to try and block, but the no. 9 simply lifted the ball over him to complete his personal treble. ( athough the NCEL website accredits Hepples with the second Boro goal).  That was the end of the scoring and although Arnold gave their all on the night, it was just not quite enough. F-T 3-4
Great game, action packed -- and what an easy night for the officials.
Admission £5
Programme - sold out
Attendance 131
Weds -- Heanor Tn v Barrow Tn.
Posted by Malc at 22:58