Pre-season game at the Stag Ground.


Kimberley Town FC are members of the CMFL Supreme Division, while Maltby Main ply their trade in the NCEL Premier Division. The South Yorkshire team was made up predominantly of first team players, but also contained a couple of under 19's. Kimberley had never played together before this game, the team having to be re-assembled after the departure of long-standing Manager Paul Rawdon and most of the previous season's squad.

Had a chat to Town Chairman Graeme Critchley before the game and he was fairly upbeat. He may need a bit of cheering up after this heavy defeat though. He told us that most of the squad are local to the area, whereas last term the majority of his players were from the Sheffield area. He may need to cast his net a bit further before the CML season begins, or this will be one long, hard season for his Kimberley Town team.


Graeme has produced a programme for Kimberley's pre-season games and it features a couple of the "On The Road" blog entries. Very flattering when your work is appreciated. The cover picture is a gem - I have no idea which ground it is mean to depict, and I know nothing about art, I just know what I like....


Anyway, many thanks to Mrs. Critchley for walking half way around the ground just to hand us complimentary ones. 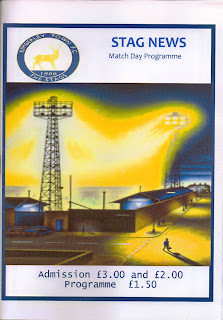 When watching pre-seson games, it is mostly a game of guess the player - on this occasion, and I think this has to be a first, I knew NONE of the players on either side......so "no name" scored all eight goals !!


Kimberley went behind in the 11th minute when their young keeper failed to hold onto a fairly tame shot from Maltby's no. 10. Seven minutes later the score was doubled when the tricky, pacy no. 9 crashed home an effort from 16 yards that the keeper got a hand to, but couldn't stop entering the net.


On 21, Kimberley's no. 12 saw his 20 yard free-kick tipped over the bar by the visiting keeper, but that was about all the home team could muster. The Main's 15 shirt hammered home from 18 yards on 38 after being given far too much time by the Kimberley defence, then seconds later their no. 10 was played through on goal and calmly chipped the home keeper. H-T 0-4


Kimberley made defensive changes at half time, and they appeared to cope a little better with their visitors. They even managed a couple of shots at goal, but it wasn't to last. Maltby's 12 jacket hit the ball into the box from the left in the 58th minute, giving no.17 a simple side-foot tap in. No. 15 beat the Kimberley offside trap on 76, and despite the keeper's valiant efforts, the striker was able to slot home.


The goal of the game was, inevitably, scored by Kimberley! After showing little or nothing as an attacking force, a long ball out of defence was latched onto by their 7 shirt, and he placed his shot over the advancing keeper into the net. Great finish. The final goal of the game was scored with just two minurtes to go - a corner from the left was played to the Maltby left back who hit a superb cross to the far stick to where no. 11 was on hand to head home.


Maltby looked a decent team, and were well disciplined - and were lead well by their skipper. Kimberley can only get better, but they have only three more weeks to try and put together a squad that can be competitive in the CML Supreme. F-T 1-7