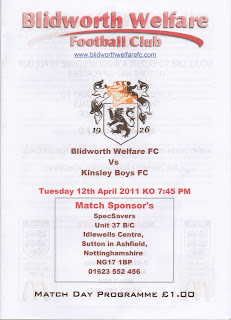 Our original game was supposed to have been Long Eaton v Bridlington Town, but when the Blidworth v Kinsley Boys game was switched to the same night, and with our Referee friend Rob Townsend in the middle, we decided Blidworth may be a better option and so off we went to the Welfare Ground.  ﻿Long Eaton finished 0-0 !
Trev "Wheelchair" Williams was on the gate, and told us he was at the Worksop / Kendal game last night.  Rob Waite had already said the game was rubbish, and Trev backed up his opinion. When we met Richard "Wanderer" Lane, he told us he'd also been to Worksop . he also said it was rubbish!  Glad we didn't do that game!
﻿﻿
﻿﻿
﻿﻿ ﻿﻿

Kev took a few pics and then found the video function of his camera, and recorded several clips of the game.  Made him chuckle when me and Richard were caught out .. we only wanted to know the model of the camera.....
The game was just 16 seconds old when Blidworth took the lead! Great interplay between Dean Rick and JAY EDWARDS ended when the midfielder showed neat control and fired past Ricky Watson in the Kinsley net.
﻿﻿
﻿ ﻿﻿

It could have been 2-0 on 22, but finding himself one-on-one with Watson, Carl Haslam tried to lob the keeper, only for the effort to crash off the bar and out to safety. H-T 1-0
Any thoughts of this game ending 1-0 evaporated inside the first minute of the restart, when CARL HASLAM collected the ball from a Rick flick on and rounded the keeper before firing home from a tight angle.
Rick saw his free-kick well saved by Watson soon after, but the keeper blotted his copy book on 54, tripping Haslam in the box, giving Ref Townsend no choice other than to award a penalty.  DEAN RICK tried a delicate chip from the spot, allowing Watson the chance to parry. Rick was first to react though and lashed the loose ball home from a couple of feet out.
Rick shot well saved
Rick scores at the second attempt!
It was 4-0 in the 58th minute, that man Haslam again the creator, his cross from the left rifled home by SIMON ELLISON.  4 became 5 on 64, another Haslam cross from the left, another drive past Watson, this time from DEAN RICK.
Ellison lashes home the fourth Blidworth goal﻿
Rick buries the fifth!
LIAM HALLER scored a consolation goal for Kinsley after 73 minutes, prodding home after Blid worth keeper Paul Stanhope had fumbled an attempt to collect a free-kick.  The visiting no. 8 was dismissed in the final minute of the game, after a reckless challenge that saw Rick hobble from the field of play. F-T 5-1
This was the Blidworth we saw early in the season, Haslam back to his best and his team mates taking full advantage of the winger's undoubted talents.
Admission £3