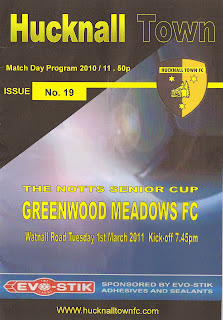 Surprisingly few games to choose from - obviously the bad weather over the past three months hasn't played too much havoc with the fixtures! Was unsure about going to this tie, and only decided when we were informed that Hucknall had done the right thing and reduced the admission price to £4.00.....other teams take note please!! Town also did a half decent programme for £0.50 - so overall well impressed.

The only issue I have was a comment by the Chairman in his programme notes about "the treatment handed in the previous round by their opponents", and they "did well to not have too many injured players afterwards". Sorry David, but we were at that game and yes, it was a bit of a tough one, but it was never really dirty and you have to realise that when playing step 7 teams you play against step 7 players and you should be prepared for a bit of a battle.

A pity the reduced entry fee did not attract a bigger following ( officially 55) - but a tie against EMCL outfit Greenwood was never going to see a big gate. The stay-aways missed a good game, albeit a little one-sided. Hucknall took the lead in just the 6th minute when a good spell of pressure saw a shot deflected into his own net by Juree Staples. The PA bloke gave it to David Graham, but it was a clear OG.

ANTHONY GRIFFITHS Jnr grabbed the Yellows' second on 20, firing past keeper Murphy from the edge of the box. The home team made it 3-0 after 33 minutes, a ball out to the right found Whitman who raced into the box before sliding the ball across the 6 yard box to an unmarked DAVID GRAHAM, and the veteran striker made no mistake tapping home. Whitman brought out a fine save from Murphy seconds later, the midfielders curler headed for the top corner before the keeper dived backwards and tipped the ball onto the crossbar. H-T 3-0


Greenwood reduced their arrears 6 minutes into the second half, JORDAN PRANCE finding far too much space on the edge of the area before firing unerringly past Kearney in the Town goal.

Hucknall restored their three goal advantage two minutes later though, a cracking cross from the right by Fabian Smith finding hitman DAVID GRAHAM who was allowed space to tap in again from close range.

At this point I put my gloves on and consigned the notepad to the coat pocket - it was a cold night with a biting wind and to be fair after the teams introduced their subs, the football went to pot and was really nothing to write home about. Meadows young winger Craig Meakin received a straight red card from the Referee just before the final whistle - I can only surmise it was for something he said. F-T 4-1

Attendance 55 ( head count was more, but there are a lot of officials at Watnall Road, so I could have counted them!!)