Bank Holiday game 1 -- Evo-Stik Division One South encounter - quite entertaining with both teams playing some decent football at times. In an ideal world, Rainworth would have come away from Stoke Lane with something, but a defensive lapse in the 75th minute saw them concede from a corner, a goal that decided the game and gave the home team all three points. 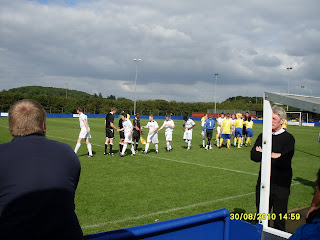 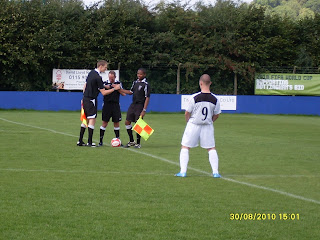 Caught up with Brian Dennett and Mr. Mac again, but we then decided to try and find a bit of shelter from the damn awful pong that sometimes permeates the air at Stoke Lane....ened up behind the Rainworth goal for most of the first half, and had a natter to my old mucker "Mintie" and his lad. 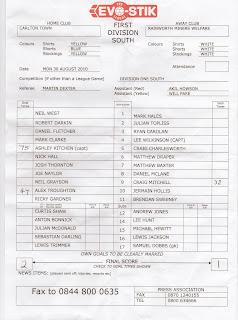 The game started off with both teams seemingly wary of each other, and they cancelled each other out superbly! Hales was the far busier of the keepers, but it was his long punt out of defence that lead to the Rainworth opener, CRAIG MITCHELL latching onto the clearance before rounding West and rolling home.

Rainworth then came under intense pressure as the home team looked for an equaliser, again Hales having to be on his toes as Carlton tried time and again to level. It looked like the Wrens would hold out until the break, but then Gardner's ball in from the left found ALEX TROUGHTON, he made no mistake slotting under Hales. H-T 1-1 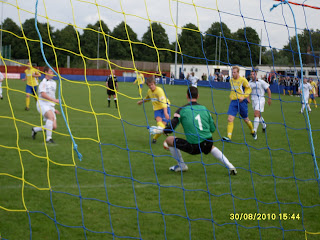 Troughton slots under Hales to level for Carlton

Went into the clubhouse at half-time to see if there were any scores on Sky Sports news, but it appears thathe Conference isn't worthy of coverage. So back out and for the second half we stood behind the Rainworth goal again! Plenty of action in the second half, and most of it in front of the Wrens goal - Carlton were unlucky not to take the lead on 53 when a ball in from the right went straight across goal and missed everyone before going out for a goal kick. 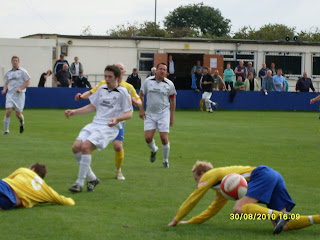 The ball evades everyone!! 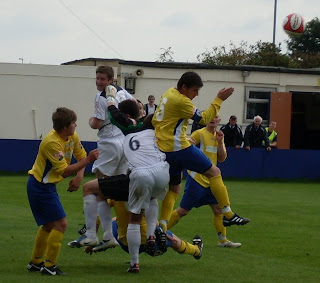 This ended up with Matt Draper (no.6) flat out! 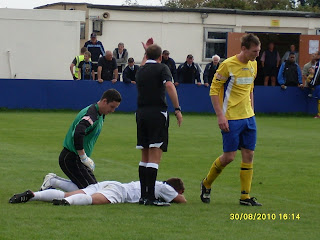 Wrens skipper Lee Wilkinson was unlucky to concede a corner on 75 - but Carlton took full advantage when Shaw's ball in flicked across the goal off Gardner, and ASHLEY KITCHEN bundled the ball over the line from a couple of yards out. Rainworth tried in vain to get back on terms, but even with Neil West giving a somewhat eccentric display of keeping, the Wrens couldn't find the equaliser. F-T 2-1

Next - Kimberley Tn v Calverton MW
Posted by Malc at 17:22