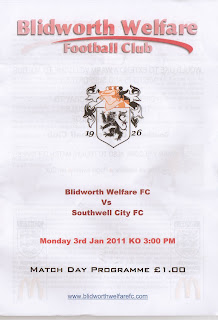 On my own for this game as Kev had to work - still going to grab the £1.05 charity dosh off him though!! Blidworth paired strikers Dean Rick and Dave Bramwell together for the first time, while City had former Heanor Town striker Matt Timpson up front along with ex-Welfare man Bradley Wells. 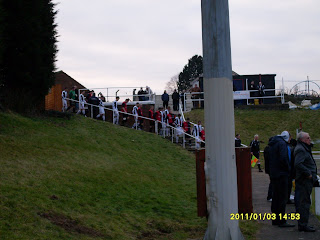 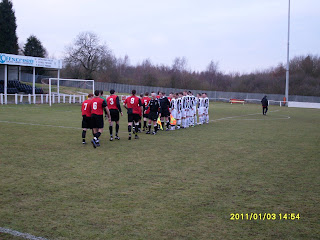 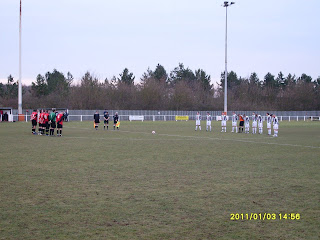 Southwell should have been ahead in the first minute, but Timpson fired hopelessly wide after being given acres of space in side the box by a sleepy Welfare defence. Bramwell hit the back of the net with a diving header on 12, but was just off-side when Jay Edwards crossed the ball and the linesman's flag ruled the effort out. Rick had an effort well blocked by the Southwell keeper - then Edwards fired just wide as a stuttering Blidworth team tried in vain to crack the stubborn City defence.
It was the visitors who opened the scoring - a shot from Timpson was well blocked on the line by Lee Bowler, but BRADLEY WELLS was on hand to tap home as the ball ran loose. The lead was doubled on 33, this time MATT TIMPSON hammering the ball home from the corner of the box - the ball past keeper Fisher before he could react. Stunning strike, but it has to be said that the closing down was poor from the home defence.
Blidworth managed to pull one back with three minutes of the first half remaining. Edwards fired in a corner from the left that Issott headed back across goal to DAVE BRAMWELL, who managed to get a head to the ball and guide it into the net. H-T 1-2


The second half was only 30 seconds old when Blidworth drew level. Haslam's quick throw found DEAN RICK in the box, and the striker turned "on a tanner" before smashing the ball into the corner of the net from 15 yards.
Wells hit the post on 50 as Southwell tried to regain the lead, but they were undone by another terrific piece of skill when a superb ball in from the right dropped over CARL HASLAM's shoulder and the winger expertly volleyed home from just inside the area. This brought a loud cry from the Southwell dug-out, aimed I assume at the City defence -- " w*nkers - all of you . you're all w*nkers!!"


The Southwell cause wasn't helped when their right back Jamie Bennett was sent off for making a rash challenge on Bramwell. This lead to Bramwell being withdrawn and replaced by Simon Ellison.


Blidworth took full advantage of their numeric superiority, and Haslam set up DEAN RICK for his second on 75, unselfishly picking out the hit-man after weaving his way into the area. Two minutes later SIMON ELLISON finished well after finding room 18 yards from goal, effectively ending game as a contest. F-T 5-2