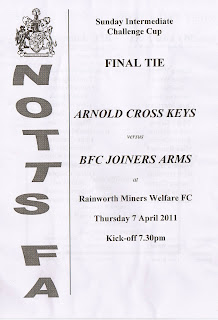 EMPAL Div 1 leaders Cross Keys took on BFC Joiners Arms who are currently second in Gainsborough Sunday League Div 1.  Venue was Kirklington Road, home of Rainworth MW.
Met Fred Kirkbytown and "Bury fan" Paul inside the ground, and were with them throughout the game - good company adds a lot to the evening....
Said hi to Rob Townsend, Peter Craggs, John Waterall, Mick Connelley, then Cross Keys player Mike Banister and his dad came and said hello. Mike was cup-tied for this game, but was kind enough to put names to the Cross Keys numbers. Thanks Mike! 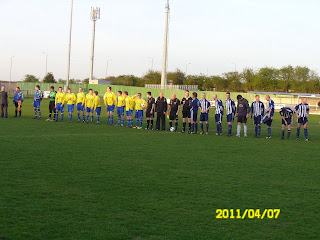 With Arnold having a star studded line up, we expected a few goals - and we were not disappointed.
Arnold team:  Wheat, Ward, Murdock, Soar L, Soar D, Moore, King, Green, Bignall, Carter C, Hawkridge.  Subs: Jefferies, Hawkins, Carter J.
After the usual sparring, the games first goal arrived on 6 when CONOR CARTER slotted home from the corner of the 6 yard area.
﻿
﻿﻿Two minutes later Terry Hawkidge played in a superb through ball, and without even breaking stride, RYAN KING lashed the ball past the BFC keeper.  Despite going 2 down so early in the game, BFC tested the Arnold defence on several occasions, but they couldn't add the finishing touch that some of their play deserved.
﻿
Cross Keys added their third on 42, a rasping 22 yarder from TERRY HAWKRIDGE that was in the net before keeper Goodall could react. H-T 3-0
On 57, CONOR CARTER turned well inside the box and fired home after good work by Hawkridge, then 6 minutes later BFC reduced the deficit when skipper SIMON BREWSTER finished well at the far post.
The gap was back to four after 72 minutes though, ALAN JEFFERIES converting from the spot after Carter had been upended in the box.  Not much more to add - 5-1 , game over.
Jefferies nets the fifth from the spot
Admission £2 inc programme
Fred H/C 100
Posted by Malc at 22:56