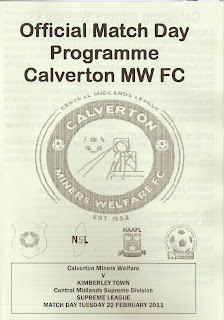 Back to Hollinwood Lane again - this game was definitely on - according to the League mitto website anyway.

The pitch looked ok after the battering it took on Saturday - and even though it cut up a little, it was perfectly playable. This game was between the League's bottom two teams, but it turned out to be very entertaining, and most enjoyable.
Kimberley are still without a win this season, but the took the lead on 13 when their no. 6 ( name not known, sorry) latched onto a free-kick into the box and fired the ball across Calverton keeper Mike Randall and into the back of the net.
The lead lasted barely three minutes though - a Jamie Humphries free-kick into the area was headed at goal, and although the Kimberley keeper did well to block, the loose ball fell straight to JAMES RANDALL who had the simple task of tapping home.
The home team pressed well and went ahead in the 37th minute, a cracking 35 yard right foot pile driver from left-back RHYS DAVIES that simply flew into the net with the visiting keeper grasping at thin air. What a strike! Mind you it was almost surpassed after 41 minutes by the Welfare centre-half who tried his luck from 45 yards and was unlucky to see the effort crash of the crossbar! H-T 2-1
The second half was a little less entertaining than the first, and the only notes I took were ref the two further Calverton goals. Halfway through the second half Harry Simpson crossed into the box and found JAMIE HUMPHRIES who somehow guided the ball home despite scuffing his shot. With three minutes to go, Referee Gary Smith played a cracking advantage allowing the ball to be played to HARRY SIMPSON who delicately lifted the ball over the keeper into the top corner. F-T 4-1
Another decent performance from the young Calverton team - but Kimberley again struggled to find any form and look destined for the wooden spoon this season.
Admission £3
Programme £1
H/C 35
Posted by Malc at 22:17