Forest Town kicked off their Notts Senior League campaign with an emphatic victory at Green Lane. One goal each for James McCann and Sam Holmes, with a brace from Mike Taylor and a triple from Mark Carter. Clifton ressies were playing on pitch two - finished Clifton 4-3 Southwell City. 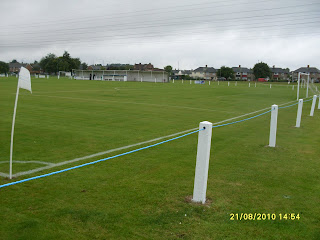 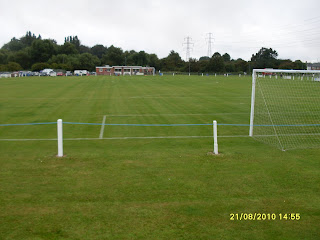 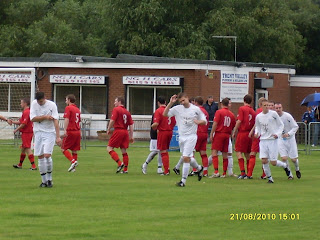 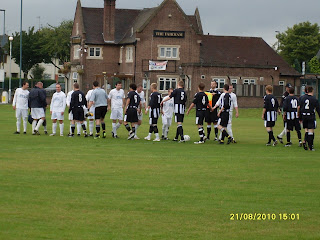 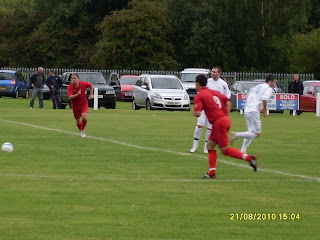 At the end of last season, Forest Town made the decision to end their association with the Central Midlands Football League and take up a place in the Notts Senior League. It's not for me to question why, but I can say that the change of leagues meant nothing to the majority of the Foggo playing staff, the majority of whom decided to stay with the Mansfield outfit. Clifton were NSL Senior Division champions last term, so I thought that this would be a decent game to go to. Kev had never been to Green Lane before, and looked pleasantly surprised when we pulled into the car park.

Got to say that the road leading from the A453 to the ground has some of the biggest road humps I have ever seen....and there were dozens of them! I have been to the venue on several occasions, but have never seen a senior game there. Renamed as a Memorial ground in honour of the late Norman Archer, a true gentleman and football devotee - a gentleman that I came to know quite well during my time spent as part of the Young Elizabethan League committee.

The playing surface was immaculate, and the intermittent heavy showers ensured the ball would skid along nicely.. For the first 10-15 minutes or so, it was all Forest Town, with Clifton struggling to get into their visitors half. Sam Holmes was booked after just 5 minutes for a high challenge, but surely that early in the game, and in driving rain, a quiet word may have been sufficient. Having said that Referee Mr. Des Brown had a good game, and was always in control. 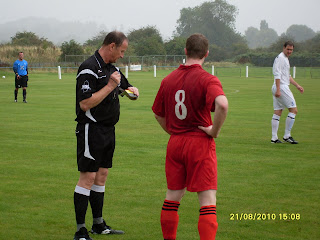 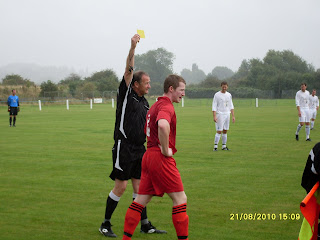 Holmes in the book Danny Tighe tried his luck from 20 yards in the 7th minute, then 90 seconds later Mark Davies saw his effort blocked by Clifton keeper Joe Parlatt. Town went ahead on 15 when Parlatt failed to hold onto a Sam Holmes shot, giving MIKE TAYLOR the a chance from 4 yards, and the striker is not going to miss from there. Parlatt was making his debut for Clifton, and he looked very unsteady on occasion, and should have done better with several of the goals conceded by Clifton.
Surprisingly, the home teram were level three minutes later - KARK MITCHELL beating the off-side trap before sliding the ball under Foggo keeper Johnson. The scores were only level for five minutes though, and it was a strange goal that put the visitors back in front. A long ball into the area appeared to hit MARK CARTER on the head before looping over Parlatt and ending up in the net! JAMES McCANN was the next name on the scoresheet, firing a low drive from the right-hand corner of the box that flew past Parlatt. With three minutes of the half remaining, MARK CARTER added his second, pouncing on the loose ball after Mark Robinson's tame shot had been blocked. Right on half-time Taylor found space before playing the ball across the goal to where SAM HOLMES was waiting to bundle home. H-T 1-5
Made our way to the clubhouse for tea and coffee - both very nice and at £0.60 very reasonable. 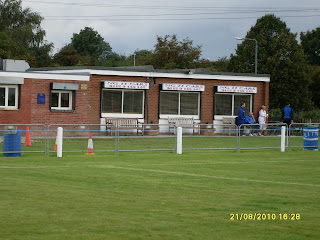 Clubhouse - with bar and snapshed
Back out as the players re-entered the pitch, and two minutes into the second period Forest Town scored their sixth goal of the afternoon, MIKE TAYLOR sliding in to divert the ball past Parlatt. In the 57th minute Town netted again, great play between Robinson and McCann ending with the winger firing across the goal giving MARK CARTER an easy tap in at the far stick. Should have been eight after 78 minutes had been played - but sub Tom Jenkins had his header well saved by Parlatt. Jenkins foiled! 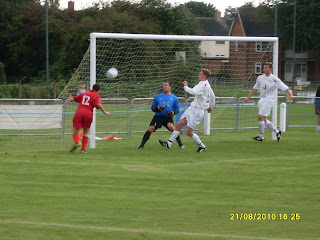 Clifton tried to get back into the game but they had little to offer up top, and although Johnson was forced to dive to palm away an effort from the 15 shirt, they didn't really look like reducing thier arrears. F-T 1-7 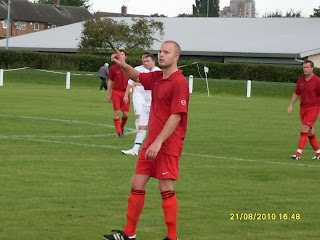