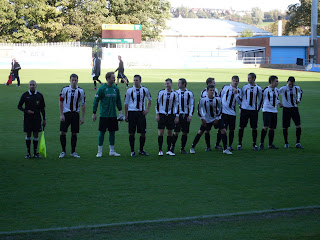 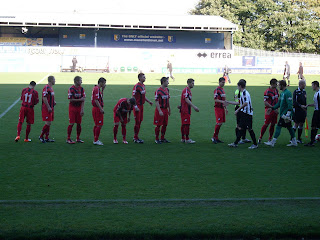 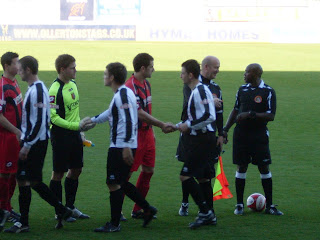 
Our first trip of the season to Field Mill after visiting 20 odd times last season. This time Mansfield Town were Glapwell FC's landlords as they took on fellow Evo-Stik Div 1 South members Stamford AFC. Unusual for us to even bother with Sunday games at all, but as we have yet to see either team so far this season, off to FM we went. Parked just outside the Stadium, and even though we were there for 2:40pm, there were no programmes left. I don't usually bother with a programme, but I would have liked one for this game.


The ground was very sparcely populated, but Brian Dennett was on hand to greet us, Mr. Mac was also present. Fellow Tony Kempster forum poster "Borogaz" introduced himself - he had made the trip from Grimsby. Stamford's skipper Miles Chamberlain's dad also came and had a word. We know Miles from his time spent at Eastwood a few years back - his family follow him to all his games - and they travel to the games from their home in Skegness! 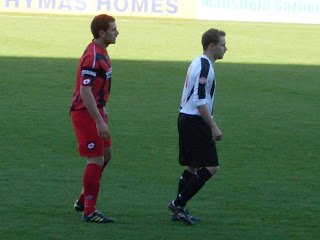 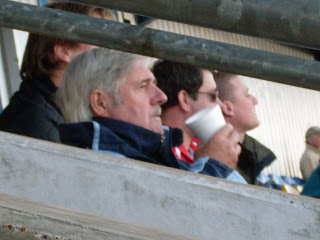 Mr. Mac - he gets everywhere!!

Not too much happened early doors, but then the "home" team controversially took the lead in the 20th minute. Glapwell striker Ian Brown appeared to run into Ross Watson leaving the Stamford defender in a heap on the ground just outside the box. No whistle was forthcoming from referee Mr. Leslie and Brown played on. His shot was well parried by Wright in the visitors goal, but CONOR HIGGINSON was on hand to tap home from close range.
Matt Varley saw his header from a right wing corner headed off the line by Malone, but apart from that, there was little else worth mentioning. H-T 1-0 
Chamberlain almost gifted the home team a second just after the restart, but Brown was unable to capitalise on the error, sending the ball sailing into the Quarry Lane End!


Watson saw red on 63 after an horrendous two-footed challenge on Ian Holmes, but going down to 10 men seemed to galvanise the Daniels, and they should have been level soon after. A weak header back to James Lindley in the Glapwell goal saw the keeper stranded, but Miller could only watch in anguish as his shot crashed against a post with the empty goal gaping.
Glapwell secured passage into the next round in the 84th minute when HIGGINSON again found the back of the net, this time a speculative low drive from the corner of the box just sneaking in off the far post. F-T 2-0
Admission £6
Attendance - 144( thanks, Brian!)
Unsure where next, but probably Wednesday - South Normanton Ath v Moorlands Railway
Posted by Malc at 18:01