Cracker - pre-season has got going at last!!! A great game between two teams who were very good on the night...... 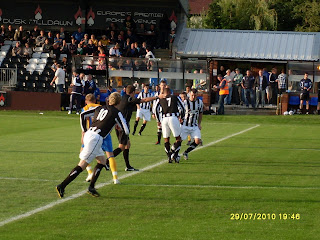 Left home early for this game in anticipation of a huge turn out (officially 665) - parking is at a premium at CP if you leave it too late. As it transpired, we managed to park on Chewton Street, just up from the ground, so no big trek to get to the turnstiles. Just a fiver to get in - well done Eastwood Town FC. We did not get to CP last season at all, and it has to be remembered we used to be regular visitors. What a change in the ground since we last went! The ground is so much more of a proper football stadium now, and where did all that spectator room come from?

The perimeter seems to have grown by a few metres, but the playing surface still looked to be regulation size. As for the playing surface - wow! The change is nothing short of miraculous .... levelled to resemble a bowling green, and seeded to perfection. The only criticism would be the with new stand next to the Main Stand - if you were to sit in there, people stood standing against the perimeter fence would block your view completely. Still - overall, very, very impressed.

Match reports are available on the Chad website, the NEP website etc. so I'll just go for the short version!!

Both keepers were called into action early doors, Eastwood's Danby blocking an effort at his near post, then Collett collecting well from a Sam Duncum shot. Ady Hawes saw his header from a corner cleared off the line by Paul Connor in the 17th minute, but then he committed an infringement in the area on 24. 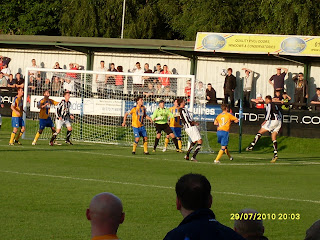 Ady Hawes header was cleared off the line Connor 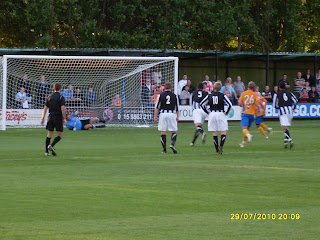 Stags new boy KIEGAN PARKER stepped up to fire the ball past Danby from 12 yards. Seven minutes later the Badgers were given the chance to level with a spot kick of their own after Stevenson was tripped -- but Matt Rhead's kick was a bit tame to say the least, and Collett saved easily. 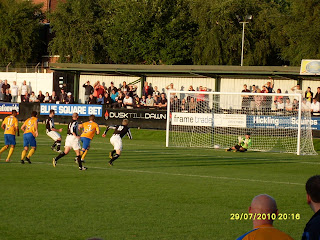 Three minutes later though , ANDY TODD showed Rhead how to take a penalty, this one awarded after Stags right back John Leanard felled Duncum. Todd's kick sent Collett the wrong way, but in all fairness the ball was struck so hard, I doubt if the keeper would have saved it if he had chosen to dive the other way.... 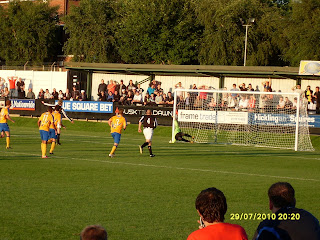 Just before the break we had a bit of hand-bags - Leonard made a rash challenge, sliding in on Stevenson, but for some reason Todd decided he wanted to be involved and manhandled the Stags player, appearing to raise his arm. Todd was lucky to stay on the pitch - no doubt in a "proper" game he would have walked. H-T 1-1

Had a walk around the ground at the break - met Dan Westwell, freelance photographer and friend and had a chat about his recent terrific Baltic cruise holiday. Judging by the three million pictures on facebook, he looked to have had a cracking time!!

Back to the game : Stags almost went ahead just 3 minutes into the second half, Gary Mills' header flying just over. They did take the lead again on 57 when the Badgers' keeper made an error of judgement and the ball fell stright to Louis Briscoe. As quick as a flash he fired the ball at the goal, and looked delighted as his effort deflected in off an Eastwood defender. Can't give that to Briscoe - sorry Louis, it was not really on target!!

Eastwood had a couple of chances, but the Stags were proving a bit of a handful, especially after the classy Kyle Nix and Matt Somner entered the fray. It was Somner who set up the visitors third goal - a terrific cross into the area that LEE GREGORY dived to head home from 6 yards. Great goal and well worth the fiver entrance fee. F-T 1-3

Straight out after the final whistle, hoping to miss the mass exodus - indeed thanks to Stig Goodman we were home by 10pm.....