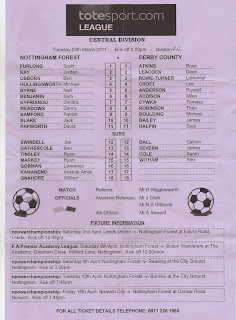 I had to make another visit to the dentist, so decided to have the whole day off and take in this game, half expecting a decent Florist team against a decent Rams team. Derby did include several players I have heard of, but the Reds decided to go with more or less their Academy team, all of them totally unknown to me, although I think some of them played v Sheffield United a couple of weeks ago.


Big disappointment for the huge crowd - but it meant a huge donation for the Charity as the rampant Rams ripped apart the ragged Reds.... Talking of the Charity, I was handed another very generous contribution by Mr. Keith Parnill, good friend and Teversal stalwart. Many, many thanks, Keith. 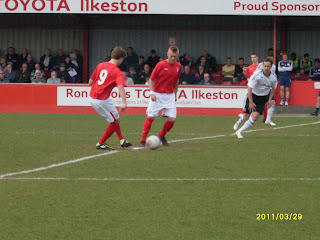 A huge crowd gathered at Ilkeston Town's New Manor Ground to see this East Midlands derby, but the fans from Trentside were a lot less happy when they walked out than when they walked in. A great carnival atmosphere as we QUEUED to get in via the ONE open turnstile, and then paid £2 to watch Forest's Academy team get hammered by a strong Derby team. The Rams scored with just 6 minutes played, SAUL HALPIN side-footing home powerfully from the corner of the box after the ball was played back to him by Theo Robinson. 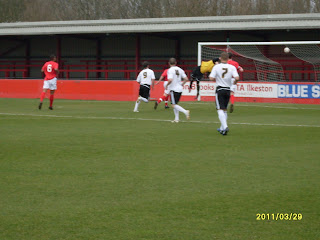 Halpin ( out of shot) crashes home the first goal for the Rams
Forest played well enough for the next half-hour or so, without ever troubling Derby keeper Ross Atkins. Derby played a patient game, creating several decent chances, one header in particular from former Stags striker Micky Boulding that he should have buried instead of directing the ball at the Scott Furlong in the Forest goal.

THEO ROBINSON struck on 38 to increase the Derby lead, a fairly tame shot for the corner of the box that seemed to catch Furlong out of position, and he could only watch as the ball went across his body and into the net. H-T 0-2 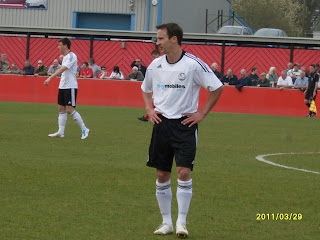 I stood with Eastwood Town supporter Mick Waterall for the first half, then was joined by Tony Squires, Keith Parnill and Mr. Mac. Brian Dennett joined us with a few minutes left to play.
The second half was a stroll for the Derby team - sub CALLUM BALL chipped Furlong from 8 yards on 54, then 10 minutes later HALPIN fired home. Forest did manage to break down their visitors defence on 67, striker PATRICK BAMFORD finding space before chipping over Atkins.

Straight from the restart, Derby restored their 4 goal lead, thanks to an O.G. Not sure which defender flicked his leg out to try and clear the Forest line, but it was a cracking finish. It was 1-6 on 70, HALPIN firing home to complete a well deserved hat-trick. ROBINSON drilled home another from 18 yards after 77 minutes to round off a very professional demolition job on the young Forest outfit. F-T 1-7
Admission £2
Team sheet FOC
Attendance -- well over 1,000 I would think...
Posted by Malc at 16:32