Typical!!!! I've just posted about how the goals are flying in this season, and this happens! Not only was it a poor scoreline for APTCOO, it was an awful game as well. I suppose it's fair to say we don't get many bad games during the season, but the only saving grace about this match was the lady Assistant Referee!! At least when the game went a bit lame, we had something nice to look at!! 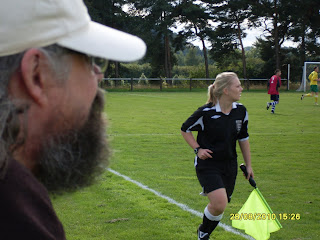 Nikki Hammond ( the one without the facial hair!!)
Calverton have a new squad again, and Newark have lost a lot of last seasons CML cup wining team - between them they had managed only 5 goals before kick off, so maybe, in hindsight, this should have been one to avoid!!! Thanks to Rick Lane for letting me have the team details - I feel sorry for him, he has to write a report about this match - I think he will struggle to get the 8 paragraphs required.... 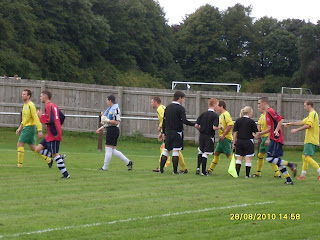 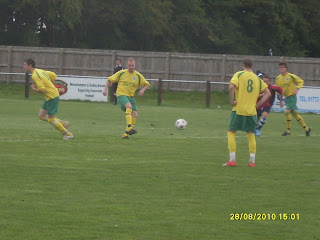 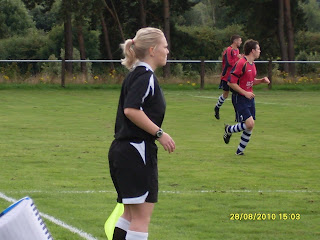 Early on, Welfare's no. 10 Clarson saw his 22 yard free kick fly just over the bar, then his team-mate Leeds had an effort blocked by Town keeper Riley. Clarson was one-on-one with Riley on 22, but failed to capitalise, firing straight at the Newark keeper.

Newark scored somewhat against the run of play in the 26th minute, their no. 8 Porter firing the ball across the goal from the right, finding LUKE PARSONS who somehow managed to squeeze the ball home at the far post. H-T 0-1
Leeds played in a shot/cross on 66 that scraped the front of the Newark bar - 10 minutes later the home team hit the woodwork again, this time Clarson's fierce drive rattling the bar with Riley well beaten.

Calverton went down to 10 men when their no. 12 was sent off for a reckless over the top challenge on Newark midfielder James Trentini. The no. 6 had to be stretchered from the pitch - it is to be hoped the injury is not too serious. 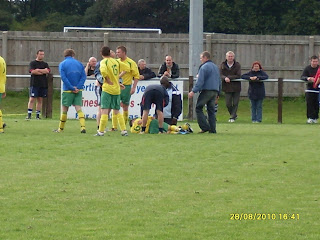 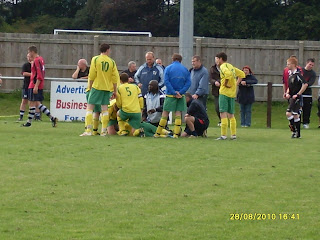 James Trentini receives treatment
There was nearly a twist in the tail as in the time added on for the injury, Calverton were awarded a penalty for a trip in the area. Up stepped Clarson to fire the ball at Riley - even worse was the shot from the loose ball by Black - he hit it miles over the bar when it was just a case of side-footing home. F-T 0-1 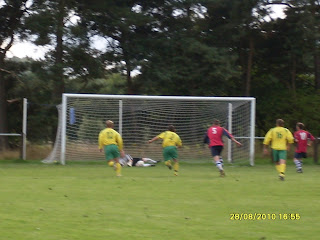 Clarson (no. 10) fires his spot kick straight at Riley