Something of a surprise result. Welfare were without several key 1st team players, including top strikers Dave Bramwell and Dean Rick, but you can't take anything away from Basford - they scored the games only goal in the 37th minute and then defended resolutely as Blidworth searched for the equaliser. United's skipper, Mark Dimech was a rock in the centre of the defence throughout, and their keeper was in superb form making several great saves. 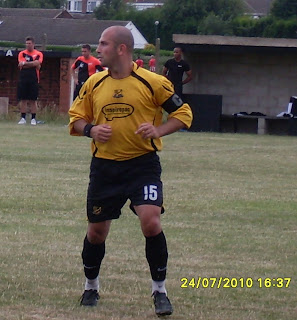 We went to this pre-season game not really knowing what to expect from Basford, and chatting to their manager Neil Smith, he didn’t either. He said he was looking forward to the game, but didn’t expect anything other than a Blidworth win. I don’t think Neil realised at the time that Welfare were without 5 key players, including two of the CML most dangerous hitmen. Neil took over Basford’s first team at the end of last season, and has had to re-build the squad as several of last season’s departed during the closed season. Seems to have done a fair job so far, although he will probably need to strengthen his strike force.
We have been to Greenwich Avenue previously, but we haven’t seen a game on the main pitch. This is fully railed off with hard standing around more than half of the perimeter, decent sized dug-outs, a small snap-shed and a covered seating area. Very nice setting and for most of the game we were blessed with bright sunshine. When the sun went in though, it turned distinctly chilly……. When we arrived, Rolls were playing Selston on the main pitch, and Neil told us that some days during the summer months they can accommodate up to eleven games! 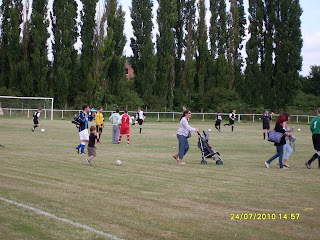 Blidworth looked good from the off, but the little and large central defensive pairing of Mark Dimech and Russ Best coped admirably. The visitors went close on 23 when Fletcher’s header flew just over the bar, but after 32 minutes, the home team went ahead against the run of play. A corner from the right was met at the far stick by Mark Nixon who rose like a salmon to head home. Great header, but Blidworth must be wondering why the ball wasn’t cut out and how it was allowed to get to the far post. 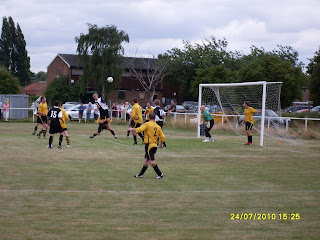 Attendance -- 30-40- ish. No gate, so people were in and out of the ground throughout the game. 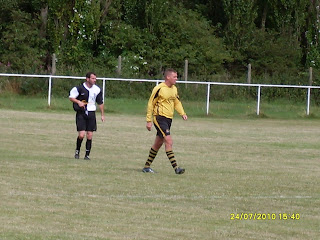 Brett Marshall came to have a chat just after the goal went in, and although he was a little frustrated at conceding, he was pleased that this was not a league game! Usually pre-season games see a lot of changes of personnel during the 90 minutes, but Brett was rotating his players in 20 minute spells – most of the players getting at least 60 minutes, rather than changing the team at half-time which gives the players only 45 minutes pitch time. Dave Issett saw his long range effort well blocked by the home keeper just before the break, and when the loose ball was hit back towards goal, a Basford foot was stuck out and the ball was cleared. H-T 1-0

Had a wander at half-time and watched a little of the game being played on the pitch next door. We could have gone to Arnold, Carlton or Mansfield today, but this was a nice change – plenty of fresh air and pleasant surroundings. 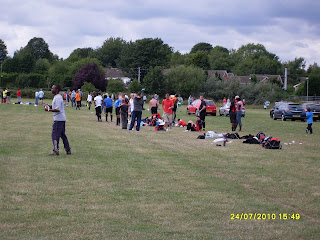 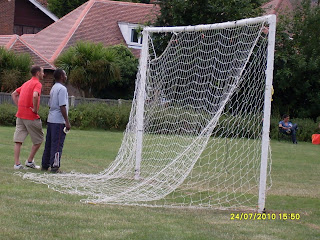 The second half was only seconds old when Blidworth were awarded a free-kick 20 yards from goal. Haslam looked favourite to take the kick, but he stepped over it and Jay Edwards fired the ball at goal and watched in agony as his fierce drive crashed off the bar with the keeper well beaten. Haslam made a great, mazy run in the 50th minute, and when he put the ball into the area, Kye Martin’s effort was gathered comfortably by the home keeper. 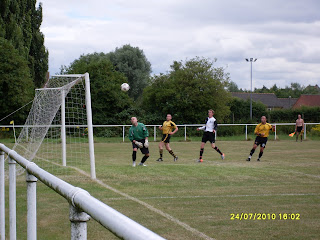 Haslam was the Blidworth danger man, and on 55, when Nathan Hollingworth fired in a superb cross from the left, the tall winger rose well to head at goal – but the cross bar came the Basford’s aid again. Haslam also had a terrific free-kick saved by the keeper - a well hit shot that was heading into the corner until the keeper dived to his right to palm the ball away. F-T 1-0 MORE IMAGES FROM THE GAME 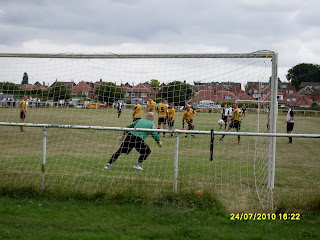