Saturday 13th November 2010 -- CML Supreme Division We were persuaded by "Fredkirkbytown" to visit the Fieldings for this game - and it turned out to be a half decent game spent in the company of Fred and Rob Hornby. The afternoon started off in nice bright sunshine, but as soon as the yellow globe sank below the treeline,
boy did it drop cold..... 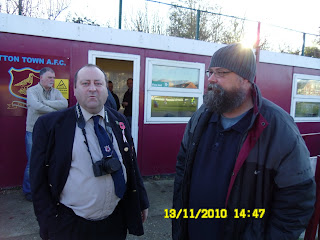 Rob Hornby and yours truly 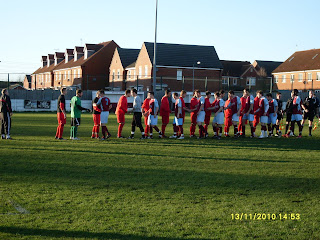 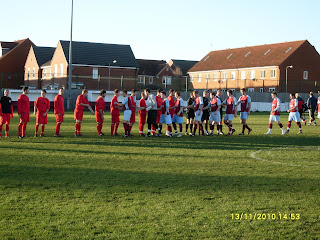 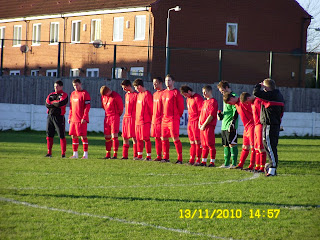 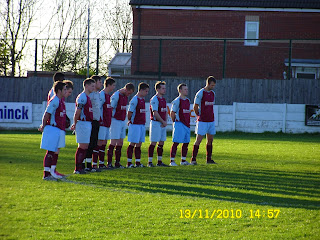 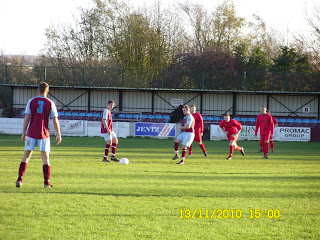 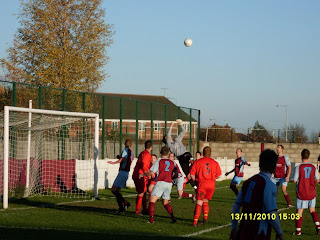 Sutton are still rebuilding after recent upheavals at the club, and it showed as Kirkby took full advantage - the home team struggling to cope with their near neighbours' attacking play. Kirkby did create a little panic early on, having a shot blocked on the line, but when NAT WATSON spotted Mimms off his line in the 10th minute, the midfielder fired the ball from fully 45 yards over the keeper, who could only watch as it sailed over his head and into the net. 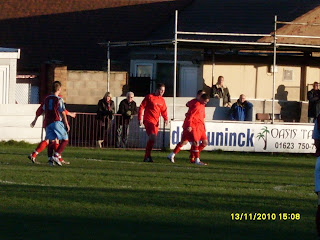 Nat Watson turns away after netting from 45 yards!

The only surprise was that it took until the 37th minute for Kirkby to increase their lead, NAT WATSON again on the scoresheet. This time a magnificent mazy run that began some 40 yards from goal, and after turning two defenders inside out, he took his time before firing past Mimms from just inside the box. H-T 0-2
Ten minutes into the second half, Sutton no. 10, Ruthven forced a fingertip save out of Kirkby keeper Louis Sprigg, but as the ball was cleared, it was played into the Kirkby box where Mimms missed his clearance leaving KYLE LUDLOW an open goal into which he stroked the ball.
Nat Watson had a hand in the fourth goal on the hour mark - his superb ball from the midfield found brother Kieren who hit a great drive that Mimms did well to block. Unfortunately for the keeper, the loose ball fell straight to KYLE LUDLOW who hammered it straight past him and into the back of the net.
Sutton almost clawed one back on 65, when tall striker Wyatt's fierce drive crashed off the bar with Sprigg grasping at thin air. The home team did manage to score in the 79th minute, no.17 HOLLAND finding room in the area after the defence failed to clear. F-T 1-4
Overall, a good performance by Kirkby, but the opposition was not the Sutton Town AFC we have come to know over the past 3-4 years or so. It's hard to pick out a positive from this game for the Snipes, but Manager Jason Kabia will have to do something soon, Sutton are dangerously near the foot of the table.
Admission £3
Programme £1
Attendance -- "fredcount" 64
Monday - Arnold U19 v Staveley U19
Posted by Malc at 17:59