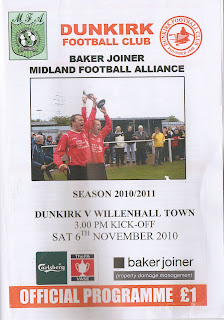 First chance to see Dunkirk since they opted for the Midland Alliance after securing the EMCL title last season. Heard good things about the Dunkirk season thus far, so after deciding to miss out on the Matlock/Hucknall game, we set off for the Ron Steel Sports ground. Arrived early, but this gave Kev the chance to find a decent parking place. Mind you, if he'd have parked where the car-park bloke told him, we would have been well blocked in. Once again Stig Goodman, please take a bow!
Kev took the handshake pics from the scaffolding stand behind the goal, then we had a wander to the other end of the ground, thinking that as Dunkirk were kicking that way, that should be where the action was.......well they did win a fair few corners, and Paulo Piliero did force Willenhall keeper Liam Flynn into a great diving save on the half-hour, but that was about as good as it got. H-T 0-0 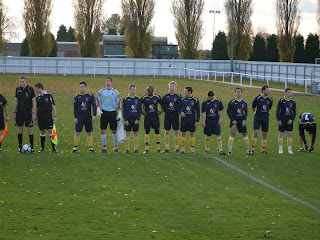 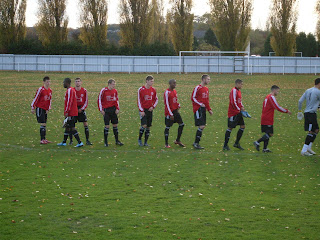 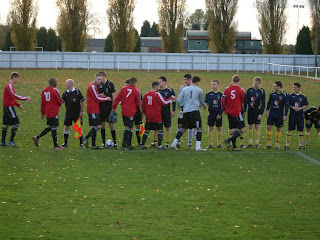 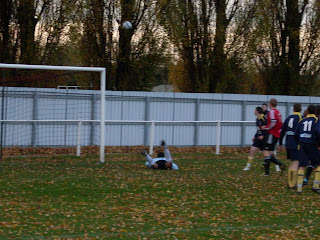 Liam Flynn tips the ball away
Willenhall almost took the lead on 53 when a huge clearance from Flynn caused problems for Dunkirk left-back Ross McGaughey and keeper Matthew Malik. Their misunderstanding left an empty goal for Mitchell Fellows to fire into, but the Town no. 10 could only find the outside of the side-netting.
The deadlock was finally broken after 62 minutes when a superb through ball from right back Phil Hopkinson was latched onto by JARROD WESTCARR, and the striker slipped his marker before delighfully flicking the ball past Flynn with the outside of his foot.
MITCHELL FELLOWS levelled the score just 12 minutes later, finding space in the box before hitting a terrific shot across Malik and into the back of the net.
We relocated behind the Willenhall goal as the full time whistle drew near - from this position we had instant access to the gate into the car-park - and as it transpired, a real close up view of the Dunkirk winning goal! After a great dribble into the box by Westcarr created mayhem, a shot cannoned off the angle of bar and post. When it came down, PAOLO PILIERO was on hand to dive in among the flying boots and bundle the ball home. F-T 2-1
There was a bit of "afters" when the final whistle blew, but we were well on our way to the car by then and were first out of the car-park ...... 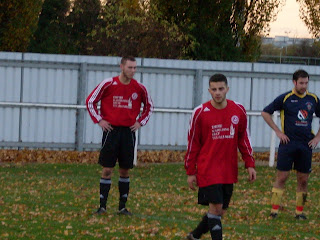 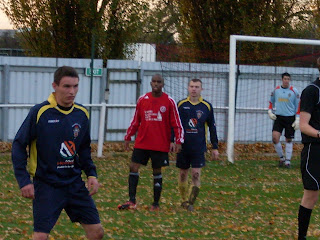 Jarrod Westcarr (centre)
Admission £5
Programme £1 very good publication for the money
Attendance - we reckoned about 50 ( confirmed as 57)
Raffle - again another club who fail to announce the winning ticket number! Little wonder we don't buy many........
Tuesday - TBC
Posted by Malc at 17:49