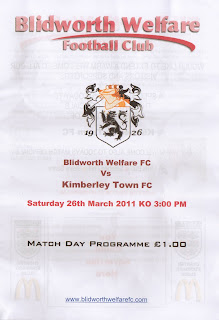 After the final whistle had blown at Kirklington Road, it was a quick dash up the road to Blidworth, and Kev was waiting for me in the car park after his "pampering" earlier in the day. Apparently he had really enjoyed the massages!! 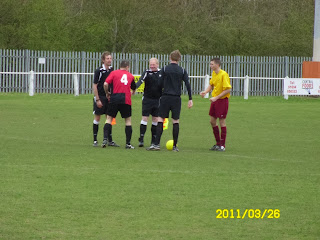 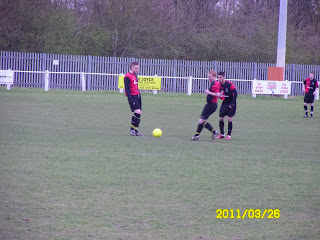 We expected Blidworth to stroll to a win, but so it seemed, did the Blidworth players! They started the game in third gear and deservedly went behind in just the sixth minute! A hesitant home defence was caught out by a ball from midfield, and LIAM EDGE calmly fired across Paul Stanhope and into the net from 12 yards. 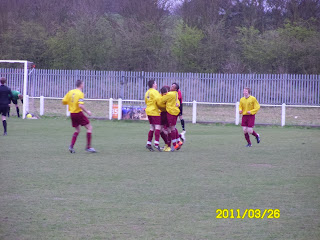 Welfare were looking anything but their usual selves, but they were level on 19. After a Dean Rick corner was played to Carl Haslam, the winger crossed low and hard across the goal and JAY EDWARDS nipped in between two defenders to prod home. 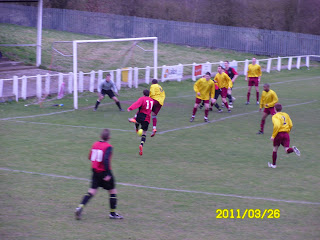 Haslam crosses for Jay Edwards (hidden) to score - our 500th goal of the season !! DEAN RICK put the home team ahead after 36 minutes, cutting into the box and firing between the near post and the Kimberley keeper. H-T 2-1 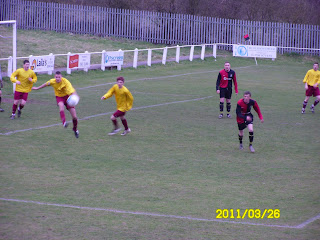 Went to have a word with "Wheelchair" Trev during the interval - he helps with the gate / raffle / programme sales at Blidworth - we seem to catch up with Trev at most games we go to .... JAY EDWARDS wrapped up the points for Blidworth in the 62nd minute - unmarked 6 yards from goal, he was able to guide Steve Carty's right wing corner over the line. F-T 3-1 With Sheffield Parramore and Pinxton both losing, the title is now Blidworth's to lose - they are 8 points behind leaders Parramore, but have four games in hand.