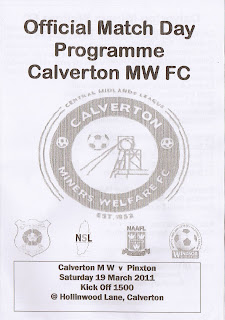 This was one of those days when I regret not staying faithful to our planned fixtures. We were due to be at Boots v Hucknall Rolls, but I changed my mind after Kev had told me he would be away, and I would be on my own. I would have really been Billy No-mates at the Boots game, so I opted for Pinxton at Calverton - at least I know the Pinxton players and management, so at least I'd have had someone to talk to!
Then Kev let me know he would be free anyway! Well, instead of going back to the original fixture, off we went to Calverton. It finished 2-4 at Boots, whilst high flying Pinxton failed to inspire, and struggled to defeat second bottom Calverton.
Entered the ground - and we were only the 4th and 5th people there!  A few more people appeared as the players entered the pitch, and after the customary handshakes there were well over 30 pitchside. 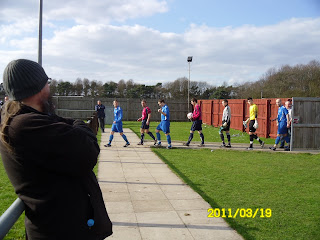 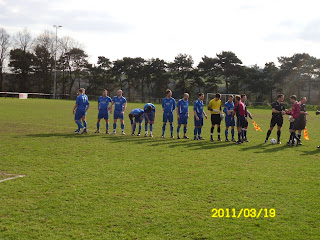 Shake
Pinxton seemed to line up with the old-fashioned 3-4-3 formation, Frazer Thomas, Ben Newman and Jamie Renshaw at the back, Blake Vincent, Wayne Cooke, Joe Riley and James Senior in the middle and Craig Housley, Jay Cooper and Arron Brady up top. They did have the majority of the possession in the first half without overly threatening the home defence. The visitors had half a dozen free-kicks and a dozen corners, but unusually for Senior, his set-piece kicks were not of the highest quality and Calverton defended them quite easily.
Calverton had a couple of decent chances as the half neared it's close, keeper Joey McCormack tipping one 25 yarder over the bar, then Calvo striker Corey Johnson had an effort blocked on the line. H-T 0-0 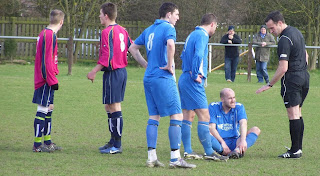 
Had a wander around the outer pitches during the break, Notts Police were playing Awsworth Villa - and one of their officials was passing on the news to his team that their ressies were losing 4-3 at half-time! That particular game finished Awsworth Villa Res 3-6 Chilwell Town, but the Villa first team did manage to beat the Police 2-1.
Pinxton went in front with their first attack of the second period when a Jay Cooper 35 yarder crashed off the bar and hit the large frame of CRAIG HOUSLEY, the ball bouncing off him into the net. Classic! 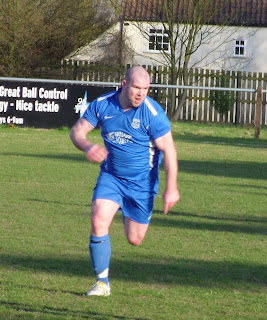 Craig Housley - grabbed both goals for Pinxton ( check out the biceps!)

The home team were guilty of giving away free-kick after free-kick as the second half progressed, but they defended well enough, and they took full advantage of hesitant defending by Pinxton in the 32nd minute, COREY JOHNSON ramming home the ball after it ran loose in the box. 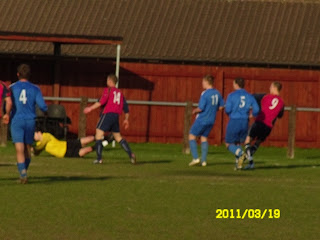 Corey Johnson ( no. 9) levels for the home team 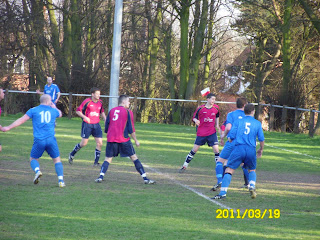 Housley reels away after netting the winner


The scores were only level for 4 minutes though - a Senior corner at last causing problems in the Calverton penalty area, and it was that man CRAIG HOUSLEY again who restored Pinxton's lead, flicking ball with superb accuracy past Mike Randall in the Calverton goal. F-T 1-2
Not the goal fest expected, but we have seen Calverton a few times this season, and although they have lost most of the games we have seen, they have rarely been outplayed. Again in this match, they showed enough to make you wonder why they are in the lowly league position they currently find themselves in.
Admission £2
Programme £1 - poor effort
H/C 30 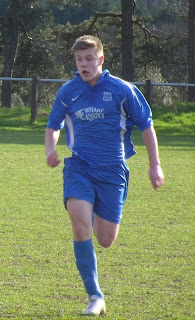