What a great afternoon out! Very enjoyable for a lot of reasons and is a definate revisit - but next time Kev can do the driving!! Relitavely trouble free drive - Kev navigating expertly along with Mr. Garmin. I have been to Langwith Road before, but it was a long time ago, and my memory isn't what it used to be....or at least I don't think it is....


We were met inside the ground by Mr. Kev Chappell - who duly handed me a dontion to APTCOO and invited us to share some corporate hospitality at half-time. Not usually something we accept, but as Mr. Chappell insisted, we were only too pleased to take advantage of a cuppa, a sandwich and a spell out of the biting wind.


Kev wandered off to take a few pics of the ground - this is a true old-school non-league ground. True, it may be in need of some TLC, but it has character by shed-load !! 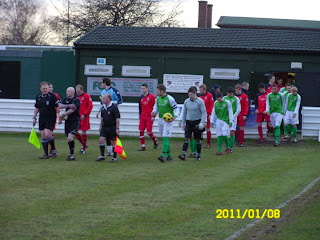 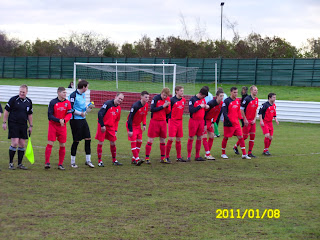 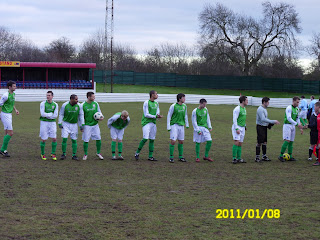 AFC Emley
One downside to the day was the lack of a programme, a team sheet and P.A. announcements. The line ups were almost a mystery - I knew a few of the Town players, but none of the visitors, so please forgive any errors! The game itself was a bit of a scrappy affair, but both teams did create the odd chance or three early doors.
We walked around the ground during the half, and managed to grab a few words with Shirebrook sub Gareth Davey. We know Gaz from his days at Sutton. He said that he is surprised at how quickly things are changing under new Manager Rudy Funk, and then mentioned the 14-1 defeat by a very strong Derby County side in the DSC. He was asked to mark Tomasz Cywka - a bit of a daunting task for the youngster!!
AFC went ahead on the half-hour mark when TEO RINGROSE ran into space and was fed the ball - leaving him one-on-one with Ed Eley in the Shirebrook goal. The no. 11 made no mistake from 12 yards. 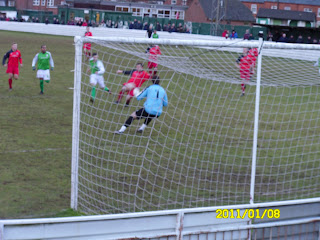 The scores were level after 37 minutes when SIMON JOHNSON appeared to get the final touch as Richard Guest fired at goal. (This has since been credited to Guest) 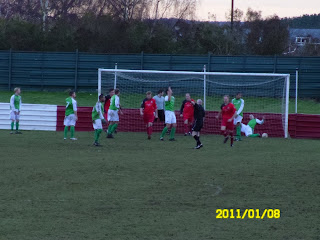 1-1
Michael Lyall hammered a shot at goal on 44, but could only watch in anguish as the ball cannoned off the goal frame before going out for a goal-kick. H-T 1-1
So - into the Hosptality area at the break as Kev Chappell's guest - he inrtoduced us to former Shirebrook player Justin Burdett - a player I knew of from his short spell with Eastwood Town a few years ago. Justin has been with Glapwell for 5 years - but is finding it hard to fit any football in at all at the moment due to work commitments. It's a shame that Justin isn't playing at the moment, but as most semi-pro footballers will tell you, work comes first - that's where a living is earned, not on the football pitch.
Very nice cup of tea, sandwich and sausage roll - many thanks Shirebrook !
Back out into the cold - the camera had been put away - but Kev was soon rifling in his pocket for the Nokia as Shirebrook were awarded a penalty for handball in the 50th minute. SIMON JOHNSON made no mistake from the spot.
Johnson converts from the spot
Lyall almost added a third for the home team after 57 minutes when he latched onto a quick throw in from Johnson and fired at goal forcing the Emley keeper into a really good save. With a minute of normal time remaining, Lyall again proved threat, this time powering through the visitors defence into the box, only to be foiled by a decent block from the keeper. F-T 2-1
These was a mass brawl as the teams left the pitch, but I have no idea what it was about and it really is none of my business.
Steady drive home - arriving just after 5:30pm. Ok, the game maybe wasn't the best, but on the whole thoroughly enjoyed the afternoon.
Admission £4
Attendance 128 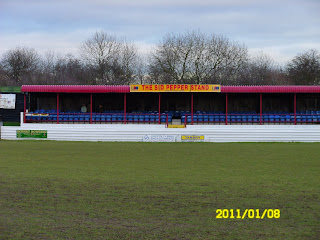 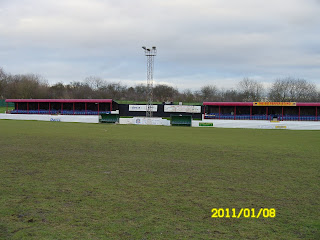 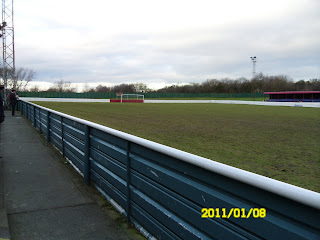 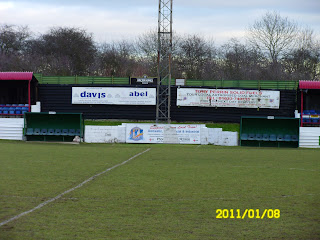 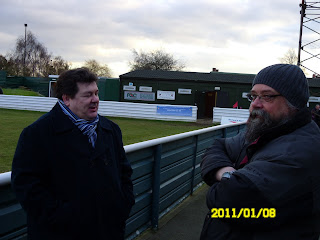 Mr. Peter Craggs and yours truly.


Peter was until recently involved with Forest Town FC in various capacities. The Mansfield outfit announced it had folded a few weeks ago, but have since decided that they are to continue, albeit under new management. Good news for the NSL who feared they were losing their big name summer signing. Peter has been a friend for a few years now, and both me and Kev hope he finds a position at another club sooner rather than later. He kindly donated a tenner to the APTCOO fund as well - top man.....