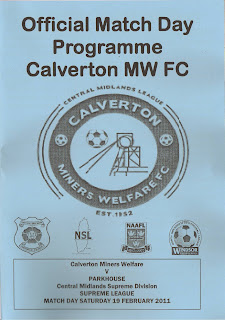 After spending all morning scanning league websites, club websites and various forums to see what would survive the overnight downpour, we ended up with a shortlist of 4 games .....
Calverton MW v Parkhouse
Belper Town v Rainworth MW

Linby CW v Bulwell
Sutton Town AFC v Newark Town
Didn't have enough time to get to Belper, and the Linby game didn't look too attractive, leaving us with either Sutton or Calvo. Opted for Calvo knowing this was definately on, thanks to Rob Hornby and facebook! As it happened, the Sutton game was called off after their visitors Newark had already arrived.


The rain had all but stopped by the time we arrived at Hollinwood Lane, and judging by the number of cars it looked like a few had decided on the Calverton option. Mind you, there was a kid's disco in the Welfare, so that would inflate the number of cars - and eminating from this disco was a bass thump, thump, thump that went on all throughout the match and was enough to drive you crackers!

Rob Hornby was present and ask me to mention that he has so far sold 110 tickets for the CML BONANZA scheduled for 25th and 26th March. 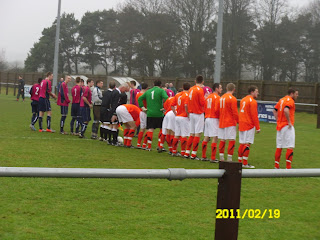 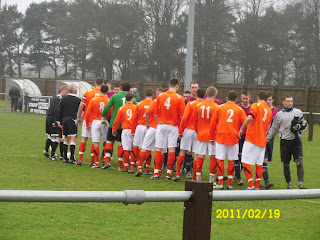 Shake !
The first chance of the game fell to the Parkhouse no. 10 in the 16th minute, but he stabbed the ball wide after finding room at the near post. The next Parkhouse attack saw their 3 jacket crash a 25 yard effort against the foot of the post. Calverton's no. 5 did well to clear off the line on 18 - the ball sliced off his boot and slammed against the underside of the crossbar before being cleared to safety.
The visitors opened the scoring after 22 minutes - a Calverton effort had been blocked by the Parkhouse keeper, and when the ball was cleared upfield, their no. 10 DAVE CHAMBERS collected well and steadied himself before firing past Mike Randall in the Calverton net. The keeper did get a hand to the shot, but it was not enough to deflect it from it's path into the back of the net.

A stunning effort from DEAN LONGDON brought the home team level on 38. Spotting the keeper was off his line, he fired the ball at goal from over 25 yards and it looped high over the keeper before nestling in the back of the net. H-T 1-1 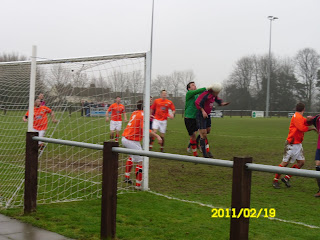 1st half action
The pitch was energy sapping, and it showed in the second half as both teams struggle to string play any football - but the home defence were kept busy by Parkhouse, holding out until the 87th minute when a cross from the right deflected off a defenders head straight onto the head of the DAVE CHAMBERS who gratefully nodded home from close range.

In stoppage time, Calverton defender Matthew Sharpe lost his composure in his penalty area, and lashed out with his boot at a Parkhouse striker. No arguement - a straight red card, a penalty that 6ft 12" no.5 CHRIS SHARMAN rammed home. F-T 1-3 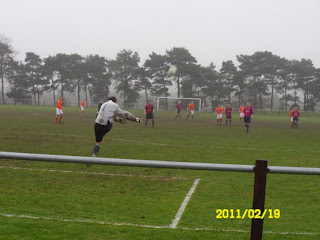 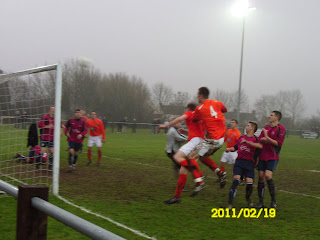