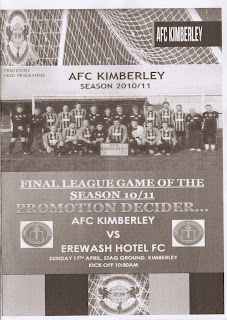 A lovely sunny morning at the Stag Ground -  the car park was full, but we were invited to drive into the ground by Mr. and Mrs. Critchley.. so parked at the back of the stand - as far away from the action as possible. Graeme's advice - he had seen the players shooting in during the warm up!!
We were invited to this game by Ant Watkinson - it was hoped that AFC's final league game of the season would see them secure promotion from Div 4 to Div 3.  To ensure this﻿ happened AFC had to win, but after just 64 seconds the home team were behind when the Erewash no. 16 ﻿raced through unapposed to fire past stand in keeper Andy Alton (?).
Gary Pickering brought out a great diving save from the Erewash keeper on 27, but 2 minutes later the keeper  had to face a spot kick after Pickering was upended whilst on his way to goal.
﻿﻿﻿
﻿

﻿
VAUGHAN CROMPTON gave the keeper no chance from the spot, bringing the scores level.  Chris Ryan had a hit and hope effort that crashed off the Erewash bar as the half drew to a close. H-T 1-1
We were joined by Gedling MW photographer and great friend Tony Hay and daughter at half time - always gives Kev an inferiority complex when he sees the size of Tony's equipment! 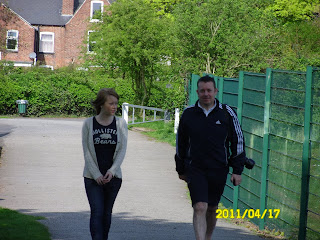 Tony had offered to take a few celebration shots, and if Vaughan Compton﻿ had have had his radar working, Tony would have been only too happy to oblige. Compton was guilty of squandering 4 or five golden chances - one of which I reckon I would have scored.  Perhaps a little unfair as the visiting keeper blocked well on three occasions. Mind you, he's a big lad.  Ever wondered what Rob Waite does on Sunday mornings? Wonder no more! 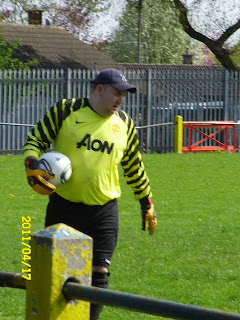 So, it ended 1-1, and with Grange Park winning, it means AFC have to hope Streamline.net can get something from their visit to Grange Park next Sunday, although that looks very unlikely - Streamline have played 20, drawn 3 and lost the other 17. League table.﻿
Admission and programme free.
H/C 12 at kick off time + a few more as the game progressed.
﻿
Posted by Malc at 15:04