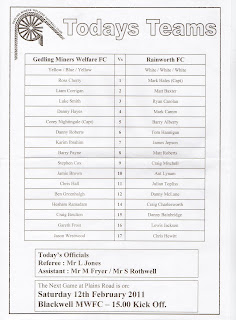 Great entertainment at Plains Road. It's a shame either team had to lose - EMCL Gedling giving their Evo-Stik Div 1 South opponents a good run for their money. Not sure if this result will stand -- Rainworth's Tommy Hannigan had already played in the Senior Cup for Arnold against Newark (report from Arnold's website) ........oh dear!

STEPHEN COX gave the home team an 8th minute lead with a well placed shot from the edge of the box. It stayed at 1-0 right until the 84th minutewhen Rainworth sub CHRIS HEWITT was allowed to run in from the left and fire home across Cherry. The keeper did get a hand to the effort, but couldn't divert it - so into extra time we went.

BARRY PAINE put Gedling back in front half way through the first period of extra-time - sliding the ball home at the far post, but the visitors were level within 60 seconds of the start of the second period. Mark Camm made a terrific run down the right wing before crossing into the 6 yard box where CRAIG MITCHELL was on hand to head powerfully home. F

So penalties it was - Michell skied his kick, but so did Payne. Then Westwood smashed his off the post to hand the advantage to Rainworth. Jepson dispatched his kick to give the tie to the Wrens, but as I mentioned earlier, I doubt the result will stand. I am not 100% up on the competition rules, but in most cups you're only allowed to appear for one team in any season - it seems that Tom Hannigan had played for Arnold v Newark in the last round, so was ineligible for this game. Over to you, Notts F.A. Competition rule 4 c.