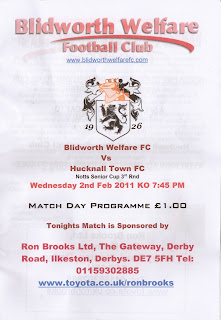 CML Supreme v Evo-Stik Premier - should have been an away banker on paper, but the Evo-Stik outfit were made to work hard for their victory by Welfare. In truth the visitors were never really troubled in the second half and it was only a case of when rather than if they were going to seal the win.


Blidworth more than matched their illustrious visitors in the first half, and were a goal to the good at the break after Town defender JOE PHEASANT steered Carl Haslam's shot across goal into his own net.

Blidworth's attempts to physically put Hucknall off their game failed in the second half, and keeper Ross Whalin had little or nothing to do as the visitors' class gradually shone through. They were level on 71 thanks to an own goal by LEE BOWLER. The defender was under immense pressure from Rob Gill and headed home at the near post. CALLUM LLOYD was on hand a few minutes later to put Hucknall ahead, finishing well after the ball was played into the area from the right. F-T 1-2

This was another great social occasion for us at the Welfare ground - Heanor keeper Mark Frost spent the first half an hour with us, then we spent the second half in the company of Neil Laughlin and Steve Reading. Kev kept in touch with the Joker at the Southwell v Carlton game, it finished 4-1 to Carlton.
Teams through to the last 8 so far: