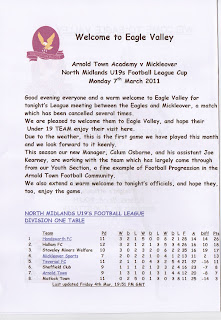 Would you flipping believe it!!! No scoreless games for months, then two come along one after the other. On a bitterly cold night the teams did a good jobn of keeping us entertained and overall this was not a bad game as goal-less games go. A couple of timely headed clearances by Arnold defenders thwarted the visitors, who were arguably just the better team.

We had Brian Dennett with us again, and as always at these games, Trev was present in his wheelchair. Had a bit of a chuckle at half-time. The last time we were at an Arnold U19 game, Trev bought the drinks at half-time, so between us, me and Kev had to find £2.40 to get the drinks in. We managed eventually to find enough change, then realised we hadn't got a drink in for Brian!

He usually gets treated to corporate hospitality during half-time breaks, so we would not normally bother buying him a drink anyway! He ended up with a bottle of cold water - not the drink of choice really with the temperature at below zero!!!!

I think everyone and his dog will be at Gedling MW on Tuesday as they take on holders Eastwood Town in the Notts F.A. Senior Cup. We're stopping in to watch Barca/Arsenal.
Weds -- Blidworth Welfare v Dronfield Town
Posted by Malc at 22:01