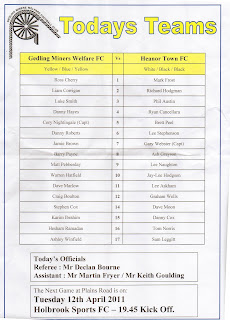 Couldn't give this a miss really - two of our favourite teams up against each other - plus it was 1st v 4th in ther EMCL table.
We always receive a warm welcome at Plains Road - many thanks to the Gedling MW Officials.
Had a chat with "Sticky" Nick Palmer - his Groundhopper blog is a must read - and the latest blog entry is a masterpiece.

Barry and Judith Wilkins were also in attendance as was Tony Squires.  Rainworth keeper Mark Hales also spared a minute or two for a chat.
Heanor were without Nathan Benger, Adam Kay, Dan Williams and James Whitehead, but welcomed back goal machine Jay-Lee Hodgson to their ranks.  Warren Hatfield returned to Welfare after a spell at Carlton Town.
The teams more or less cancelled each other out early doors, but Gedling seemed more up for the fight than the Lions, and for a while it looked like the home team might pour water on Heanor's title hopes.


The first goal came in the 26th minute, a great cross from the left met with a sweet left foot volley from about 20 yards by JAY-LEE HODGSON.  Nothing Ross Cherry could do about the goal.
After 37 minutes Lee Askham rattled the Welfare goal frame after good wing play by Hodgson.  Right on the stroke of half-time, Heanor were given a reminder that they shouldn't take their opponents too lightly, when Barry Paine's stooping header crept just past Mark Frost's far post.  H-T 0-1
Had the usual hospitality at the break - thanks Tony!
Soon after the restart, the home team drew level - and it was one of Kev's favourite players who scored.  A cracking cross from the right flew across the Town goal, and JAMIE BROWN leaped well to nod home at the far post.  Frost made a terrific diving save to keep out  a powerful effort from Danny Roberts on 61. Then came the goal of the game in the 69th minute. After Phil Austin and LEE ASKHAM linked up well on the left - the move ended with Askham firing across Cherry into the far corner of the net.
With just four of the scheduled 90 minutes left, Gedling grabbed what on the night, a deserved equaliser.  Mark Frost appeared to miss a chance to clear, allowing KARIM IBRAHIM enough room at the near post to hook the ball over his shoulder and into the net.  F-T 2-2
Thoroughly enjoyable evening again. Must admit though, I am not really enjoying blogging at the moment -- been a bit of overkill this season -- all in a good cause, but it's getting to be a little like hard work.........
Admission £4
Programme £1
Attendance 106
Posted by Malc at 22:58