A very strong Stags team playing a very under strength Hucknall, but another great pre-seson game and despite the scoreline, Evo-Stik Premier Hucknall did ok against their Blue Square Premier opponents. 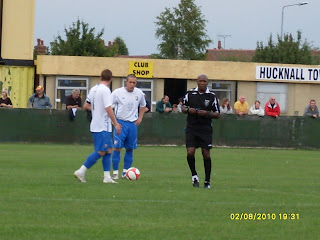 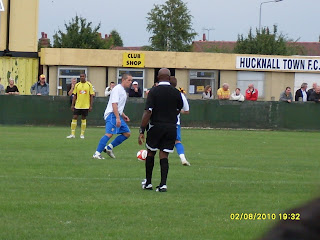 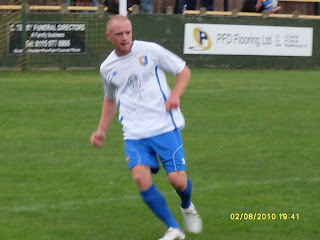 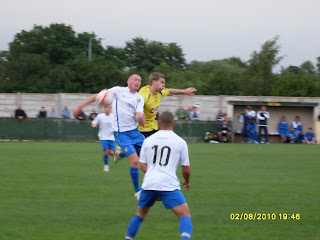 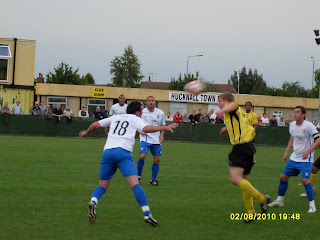 Watnall Road is just a five minute drive from where we live, but we decided to leave a little earlier than we usually would for a Hucknall home game in an effort to get a prime parking place. Mr. Goodman came up with the goods again, finding a space right outside of the exit gates - we may have been at the ground 20 minutes early, but we were first out of the car-park and back in the house for 9:25pm!!

What a game this was again - please oh great footballing God, you have to keep them coming!!!! Ok, Hucknall had a weakened side, with midfielders Wayne Duik and Martin Ball in the centre of the defence, but they more than held their own for half an hour or so. Mansfield then stepped up a couple of gears and some clinical finishing saw them comfortable winners.


The Stags took the lead in just the 5th minute,a superb free-kick fired home from 22 yards by Kevin Sandwith. Hucknall fought back well from the early set-back, and were rewarded for their endeavours with a comedy classic goal on 23. Defender makes a rick, keeper misjudges the ball completely leaving DARYL THOMAS to nod past him, and with the freedom of Watnall Road the striker followed the ball gleefully as it bounced into the net.

That seemed to upset the Stags slightly and they went back in front with a real old school goal. Hucknall won a corner, but it was hacked clear and Steve Istead brought back memories of Gary Ford flying down the right wing. The youngster's cross was perfect, finding PAUL CONNOR at the back stick who had the simple task of bundling the ball home. Seven minutes later, another classic piece of right win play, this time by Adam Smith - his run down the line and cross into the box were breath-taking. Not only was the wing play good, the fact that PAUL CONNOR was on hand again to nod home made it even better! H-T 1-3


Both teams made changes at the break, but Mansfield kept up their good work and no. 7 PAUL STONEHOUSE curled home a beauty from 20 yards with just a couple of minutes of the half played. On 67, trialist Luke Medley found ADAM SMITH 20 yards from goal, and he hit an arrow straight drive past Hucknall keeper Leigh Overton. MEDLEY hit the 6th seconds later, tapping home after Tyrone Thompson's drive had cannoned off the foot of the post. F-T 1-6