Yes! It is with great pleasure that we announce Malc & Kev go to Plains Road and see Welfare not only win, but play some good stuff as well.... 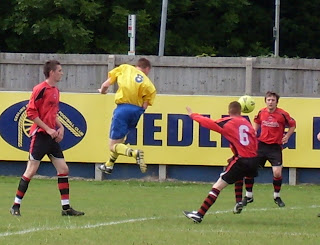 Gedling's no.8 Chris Hall in the thick of it


We were unsure what kind of reception we would get at Plains Road - we seem to struggle to see Welfare win a game there! Any worries instantly evaporated when we received our usual friendly greeting by the Gedling Committee members..


A few of the Gedling players were known to us, as were one or two of the Ollerton starting eleven, but as usual with PSF, it was a nightmare trying to find out who is who. Ollerton play in the CMFL Supreme Division and for the first 20 minutes or so they were all over their EMCL hosts. Ross Cherry in the home goal was called upon time after time to keep the visiting attackers at bay. One particular block from a Dean Hankey close range effort was outstanding. 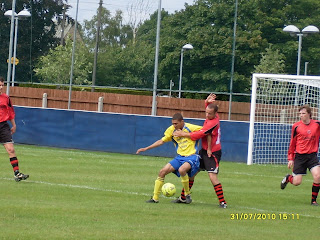 
Despite all their pressure, Ollerton failed to score and as often happens, their opponents went ahead against the run of play. Chris Hall played a cracking ball into the path of BEN GREENHALGH and the striker calmly lifted it over the advancing keeper from the edge of the box. Right on half-time, Craig Boulton fired a free-kick just past the Ollerton post. H-T 1-0 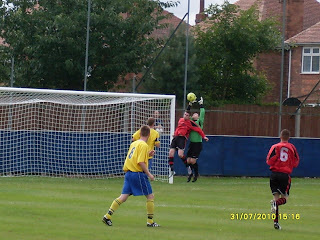 Welfare came out with their defence slightly restructured, Chris Muldoon replaced with Hesham Ramadan, with Mark Williams slotting in at right back. Greenhalgh almost gave Welfare the perfect start straight from the restart, flicking a well placed cross just over the bar. The home team didn't have to wait too long to increase their lead though. On 51, Greenhalgh played the ball wide right to Jamie Brown, who in turn eased it into the path of CHRIS HALL - the midfielder made no mistake, side-footing home from close range. 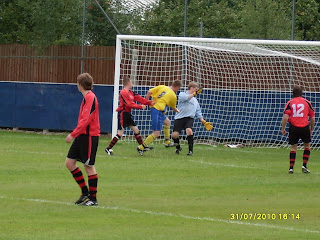 Chris Hall buries his second of the afternoon


It was 3-0 seven minutes later when a free kick into the box was headed down into the path of CHRIS HALL by Ramadam - again the midfielder converted with ease. Seconds later RAMADAN was also on the scoresheet, another free-kick headed down by the big central defender - but this time he latched onto the loose ball and whacked it into the back of the net. 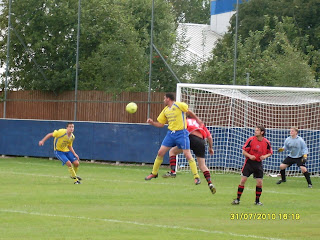 Ramadan heads the ball down, before sending it crashing into the net


So with 30 minutes still to play, the game was effectively over, but watching Gedling pass the ball about with such ease and style meant we were kept entertained right until the end. Ollerton did have the last laugh though when Lance Walker's attempted clearance in the 86th minute hit the Ollerton no. 9 on the head and bounced into the empty net. F-T 4-1