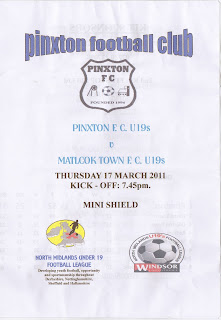 Bonus game, brought to our attention by our Referee friend Hristo Karaivanov - this was a good contest between relegated Div 1 side Matlock and Div 3 champions Pinxton.


With Kev and Mrs. Kev out celebrating their wedding anniversary, I thought I'd be on my own - not so.... Brian Dennett and Mr. Mac were in attendance and I spent the entire 90 minutes in their company. A pleasure mostly, but when they started on about Speedway, I switched my brain off......


Pinxton's no. 10 JAY COOPER had mentioned on a social network that he was hoping to score in this game, thus ending a personal goal draught that goes back a long time. Would you believe it, the game was only 90 seconds old when he tried a speculative shot from 25 yards that somehow evaded the Matlock keeper and nestled in the back of the net. Great start, and although the we had to wait until the 35th minute for the next goal, the wait was well worth it. After Matlock failed to clear their lines, the ball fell to the feet of Pinxton no. 8 ELLIOTT JONES ,and the midfielder lashed the ball home from an acute angle giving the visiting keeper no chance. H-T 2-0


The second half saw no more goals, but the football from both teams was of a very high standard. Although the teams more or less cancelled themselves out, the 22 players kept us entertained right up to the final whistle. The game was handled well by Referee Harry Hawkins - but I don't think I've ever seen Harry have a bad game. F-T 2-0

Pinxton now face a trip to either Radford or Long Eaton in the next round of this competition. Very pleasing to see so many people at an U19 game - I counted 80 watching... excellent turn out.