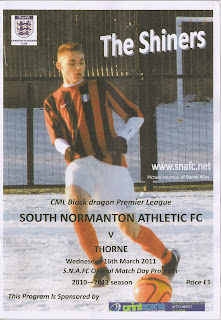 A foggy old night in Normo .. but the game never really looked like being fogged off. The visibility was poor one minute, okay the next, then poor again etc etc...


The officials really had their hands full with this bunch of players - they never stopped moaning all through the game - and it was only through Mr. Marwood showing a lot of common sense that we ended the game with the full compliment!!


The Exchem Arena is a very good venue indeed - the pitch was almost perfect, and that's a big statement considering the crap weather it's been subjected to this winter.

Darren Fell started at no. 9 for Thorne, and the diminutive striker gave the Shiners an early warning just three minute from the kick off - firing just wide of Baker's goal. FELL made sure with his next chance - firing superbly across the keeper after he had been gifted the ball 20 yards out.


When Henshaw delayed his clearance in the 40th minute, his pocket was picked and as he raced to recover the ball he fouled Fell - the striker slammed the spot kick home to give the visitors a 2-0 lead at the break.

Must have been a good team talk for the Shiners during the interval - they came out looking a different team. Kev had phoned Brian Dennett at half time ( he was at the Hucknall/Whitby game) bemoaning how poor ANDY WHITE was playing. It was the former Stags centre forward who dragged the home team back into the game, tapping in a simple chance on 51 after Tom Leighton had crossed in from the right.


WHITE drew the home team level on 69, again a simple close range finish from a Leighton cross. In the 75th minute, Normo took the lead for the first time in the game, a free-kick from the left glanced off the head of Marshall, the slight change of direction leaving Murray with little chance of saving.


Thorne deservedly grabbed a share of the points on 90, someone firing home from an acute angle - I reckon it was sub no. 14 BURNS who scored, but it could have been anyone. It was very foggy by this time and we were over 100 yards away....F-T 3-3


Fair result, but these players need to let the officials do their jobs instead of bitching at them all the time. Mr. Marwood had a good game - he still had occasion to book four players, but it could have been so, so much worse...