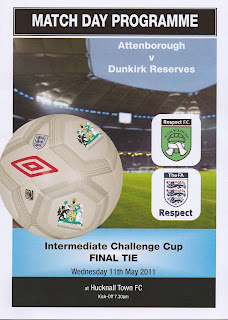 Not a lot to write about -- Attenborough play in the NSL Senior Division, while Dunkirk Reserves are members of CML Reserve Supreme Division.  Met up with my good friends from the F.A. again, Mick Kilbee always welcomes me to the Notts F.A. finals, and Mick Connelly always has a cheerful smile as he takes your money on the gate!  On this occasion, Mick allowed me in as a guest of the F.A. - so I will gladly donate the £2 to APTCOO on Notts F.A's behalf. 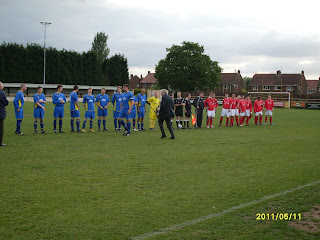 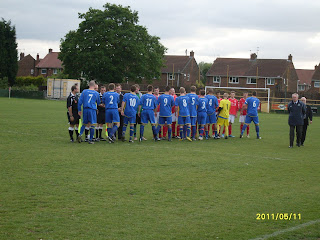 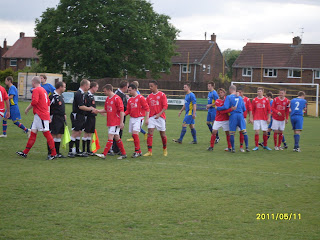 After the usual formalities, the teams kicked off and ......well, not a lot happened really!  One header flew over as Attenborough pressed, the no. 11 Liam Slater had a couple of tame efforts saved by Dunkirk keeper Jake Want. Slater almost broke the deadlock half way through the first period, but his speculative 30 yard lob just cleared the Dunkirk bar. H-T 0-0


Went into the Hucknall Town office for a coffee during the break  - many thanks to General Manager Dave Green for the hospitality - another new friend made this season.

Attenborough took the lead on 52 when STEVE OLDHAM beat Want to the ball at the far post -  although the no. 9's header was blocked, he still managed to lash home the loose ball from close range.

Both sets of players then decided to make Referee Sean Richardson's life a misery - some bad challenges, bad attitude and bad language not helping the official. JORDAN RUCK added the second for Attenborough on 68, beating the off-side trap and racing in at goal before sliding the ball past Want.  The protests were long and stupid - the goal had been given - get on with it!!!!

Dunkirk's skipper (no.6) had been cautioned earlier in the game, but he wasn't about to keep quiet and duly received a second yellow and the red followed.

Nothing else written down and nothing else springs to mind .....finished 2-0