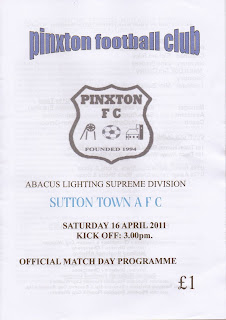 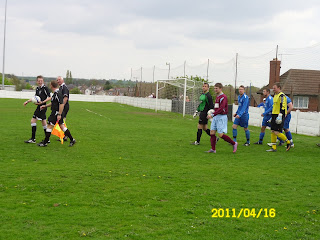 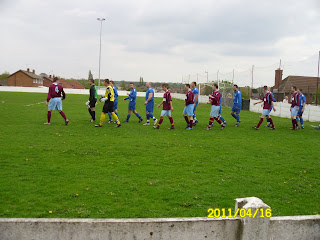 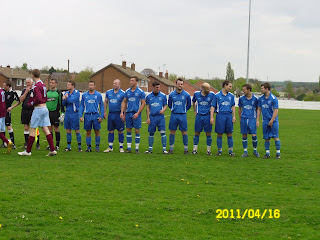 At half past two, Sutton only had 7 players, but managed to scrape together a full team by kick off time.   Ben Newman made a donation to the APTCOO fund as he stopped to say hello - thanks Benjamin, much appreciated.
﻿
﻿

It took just 4 minutes for the home team to open their account - a flick header by WAYNE COOKE bounced in front of Snipes' keeper Matt Spencer, and he watched in horror as the ball flew over his head into the net.
﻿
﻿

﻿
JAMES SENIOR drove the ball hard into the net to bag the second Pinxton goal on 8 - the set up ball from Stubley meant Senior never had to break stride.
Josh Parker hit a great ball in from the right in the 17th minute, and when it eventually fell to CRAIG HOUSLEY, the big man took time to pick his spot before lashing the ball past Spencer and three defenders on the line....
Stubley set up the fourth, laying the ball into the path of CRAIG HOUSLEY who drove home from 20 yards.  60 seconds later KIEREN DEBROWER collected the ball in midfield and ran at the Sutton goal before firing an unstoppable shot past Spencer.
On 37, Debrower played a superb ball into the path of JOE RILEY, and the defender controlled brilliantly before slamming home from 15 yards. H-T 6-0

One or two "chuckle" moments in the half ...  Senior taking a corner, but kicking the corner flag instead of the ball -- Scott Fisher falling in a heap with no-one within 20 yards of him - and Fisher again - having to be instructed how to restart the game after a goal had been conceded!!
A series of early corners lead us to believe we would witness a double-figure tally from Pinxton, but Sutton were a little more organised, and it took a fluke goal to add to the total for the home team.  A quick corner from the left by Cooke, found JAMES SENIOR who launched the ball at goal, and watched with us in disbelief as his effort caught Spencer unawares and ended up in the back of the net.

PETER STUBLEY scored the goal his play deserved on 63, a ball in from Debrower met superbly on the volley some 6 yards from goal. The unthinkable happened in the 70th minute, Sutton scored!  A run at goal followed by a shot from ADAM BONSER that beat McCarthy all ends up.
﻿
The final goal came two minutes later - a corner from the right headed across the goal by Housley to where JOSH PARKER was waiting to rise like a salmon to head home. F-T 9-1
Admission £2
Programme £1
H/C  -- varied throughout the game, but it seemed a lot of the village had turned out for this one -- well over 100 counted ....
Posted by Malc at 18:28