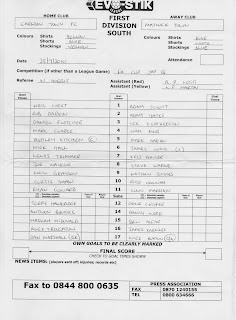 We left for Stoke Lane a little earlier than we would usually as we wanted to secure a prime parking place. Thankfully not many people had had the same idea, and there was plenty of room. On entering the ground, we went in search of Kev's work colleague and Matlock Town nut Phil Mumby. Strangely we found him pitchside - usually he is in the bar have a few pre-match bevies! Apparently he had just nipped outside for a minute and his beer was waiting for him inside..... Called Brian Dennett to see if he could provide a copy of the team sheet..... Brian never fails to come up with the goods - thanks, mate. 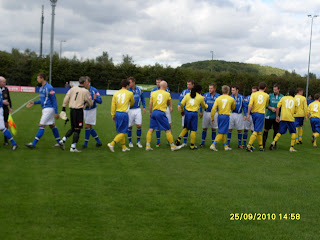 Shake
Matlock were very quick out of the blocks and Carlton seemed to back off and maybe paid their visitors a little too much respect. The Gladiators had a great chance to go in front in the 5th minute when Ross Hannah found Kris Bowler in the area - unfortunately for the visitors Bowler's diving header was saved well by Carlton keeper Neil West. 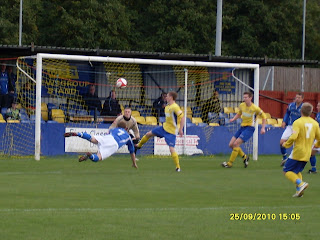 Bowler diving header
Hannah then tried his luck with a drive on 11, then seconds later he played in KRIS BOWLER who fired at goal and saw his shot take a wicked deflection to leave West stranded as the ball flew past him. West's goal was under constant pressure and in the 23rd minute he had to be alert to save from Colin Marrison, the 90 seconds later the keeper saved well from Hannah after the strikers turn in the box had left his marker for dead. 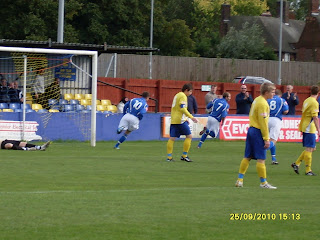 Bowler wheels away after scoring
Carlton's first real chance came on the half-hour mark - a neat ball into the box by Mark Clarke met well by Joe Naylor, but the midfielder's header just cleared the crossbar. H-T 0-1

Matlock had a chance to double their lead on 48, but Hannah's effort crashed into the side netting. This seemed to galvanise the home team who gradually applied more and more pressure on Adam Solletts' goal. Sollett did really well to keep out a Neil Grayson close range effort with his legs, and all of a sudden Carlton looked like they might grab at least a replay..

Grayson saw one shot cannon off the post, but despite their best efforts, Carlton failed to beat the excellent Sollett. Marrison was shown a straight red on 71 for a poor challenge on Rob Darkin. Just seconds earlier, Carlton's Mark Clarke had been in an aerial tussle with Marrison and the Matlock player seemed determined to show he was not going to be pushed around. 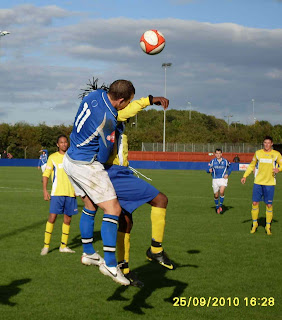 
Referee Hobbis was only a couple of yards from the incident and had no other choice than to send Marrison from the field of play. Carlton skipper Ashley Kitchen saw yellow on 81 for a rash challenge, and was almost made to pay dearly when the resultant free-kick was headed tamely wide by Hannah from 6 yards out. F-T 0-1 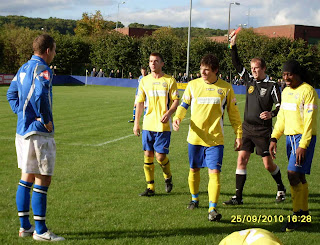 Off you go, Son


So, Carlton bow out of the Cup, but can put this result out of their minds on Wednesday as they get back to league action at home to Market Drayton Town. Matlock left Stoke Lane with their share of the takings, plus the £4500 prize fund, and a place in the draw for the next round.