Usually a good turn out for this end of season Cup final - no exception on this occasion with well over 200 present and head-counted!! 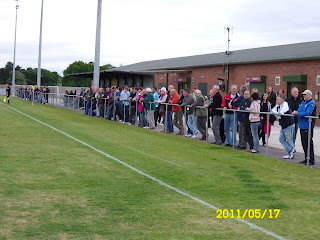 This was ostensibly our final game of the season -  may take in the rearranged Notts F.A. Saturday Junior Cup final next Wednesday, but won't be blogging it.
Brian Dennett accompanied us again tonight, but we spent the game in the company of the66pow blogmeister Rob Waite - always a pleasure and always a laugh or two to be had when Rob joins us. Rob is a Hearts / Mansfield Town / Worksop Town fan from the People's Republic of Retfordshire, a small county near Yorkshire.....
The game saw Rolls take on League Champions Boots - Boots actually ground share with Rolls at Watnall Road, so it was landlords v tenants..... 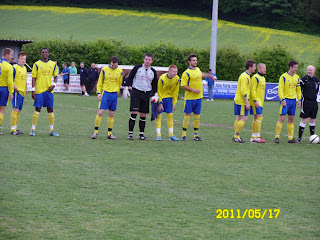 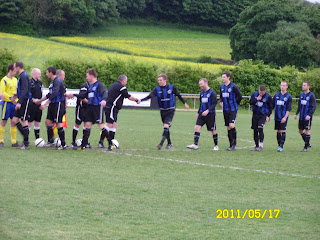 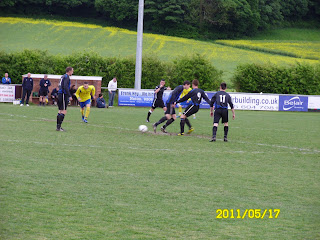 Boots took the lead on 20 minutes after their no. 11 TOMMY KEMP was allowed time to control and turn before firing past Neil Waters in the Rolls’ net.  Athletic doubled their lead a few minutes later, this time PATRICK BAKONE taking advantage of some slack marking, running at Waters and slotting home. H-T 0-2
Rolls pushed hard from the restart in an effort to reduce their arrears. Their pressure paid off 10 minutes into the half when Boots’ no. 7 ( free advertising?!! ) NATHAN HODGES headed into his own net after a frantic scramble in front of goal.
With Rolls pressing hard, and Boots looking a little ragged and losing some discipline, the spectre of extra time loomed large again – and after what happened at Clipstone last week we were not counting any chickens as we headed for the exit.
KEV WALKER eased our squeeky bums by lobbing Waters in the 91st minute to secure the victory, and see Boots complete a league and cup double. F-T 1-3