I decided to have a walk (!) to Titchfield Park in order to catch a little Sunday League action and on arriving at the Park it transpired their were to be games played on adjacent pitches. The park is a ten minute walk from where I live in Hucknall, so no need to bother getting the car out on this occasion. I went originally intending to see Green Dragon play Carlton Top Spot, but ended up watching that with one eye, and T8’ v Nuthall with the other! Nuthall looked the part – nice training tops etc. and all the management were kitted out as well - they did the synchronised warm up and even had a huddle before the kick off. As I said, they looked the part, but their football left a lot to be desired!

Dragon in blue Carlton took the lead through their no. 2 on 37, a neat strike from 12 yards. H-T 0-1. Further strikes for the no. 10 shirt in the 50th and 90th minutes secured the points for Carlton. 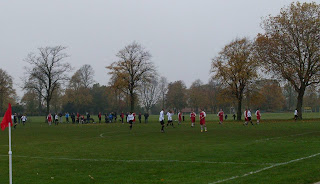 T8's in red/white Goal-less until the 49th minute when their 10 jacket ( I think this was Harry Allen) netted. Their no. 9 fired home a free kick from 20 yards five minutes later, then no. 11 rifled home a spot kick two minutes later. F-T 3-0

Bit cold and damp, but enjoyable none the less. Strange – the Green Dragon match was being watched by just two people (2 ½ if you count me!) , whilst the T8’s game had the better part of 30 watching. Mind you the better football was played by T8’s and they are still unbeaten this season, having now played 8, winning 7 and drawing the other – I will definitely make a point of going to see them again ….hopefully when there is only the one game on!!!
Posted by Malc at 12:51